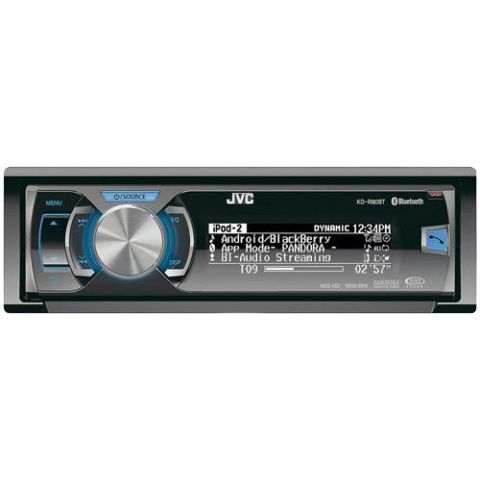 The JVC KD-R80BT produces above-average audio, but it doesn't give you the amount of control over the sound that you get with better car stereos.

Editor’s Note: This product has been removed from our side-by-side comparison because it is no longer available. You can still read our original review below, but Top Ten Reviews is no longer updating this product’s information.


The JVC Regular series features JVC's best all-around car audio systems. Of these car audio receivers, the JVC KD-R80BT has the best audio quality and most comprehensive list of features. However, despite having the fewest buttons of any of the car stereos we reviewed, it has one of the most impractical faceplates.

The JVC KD-R80BT's maximum power output is 200 watts, which is average. However, the continuous power output rating is among the highest we reviewed at 80 RMS watts. For comparison, the highest RMS watt rating is 88 and the lowest is 56. So it can handle heavier loads than most car sound systems for extended periods without an external amplifier. Like the best car stereos, it has RCA preamp outputs to the front speakers, rear speakers and subwoofers.

The audio quality isn't as great as that of the best car audio receivers, but it's still very good. The CD player's signal-to-noise ratio is 98 dB, which means that the desired signal is 98 dB greater than any unwanted signals or noise. For comparison, the best car stereo has an S/N ratio of 120 dB, but the worst has an S/N ratio of 50 dB. So the audio quality is very good. In addition, the pre-out voltage is 4.8 volts, which is only 0.2 volts less than the best pre-out voltage available.

One of the reasons the audio quality isn't great is the lack of control you have over the frequencies. You only have three EQ presets with which to customize your music to your liking. In addition, each preset only has 6 dB of leeway for you to enhance or diminish the preset. The EQ presets are as broad as possible – bass, mid and treble. Since every car has a unique acoustic landscape, you'll want as much control over the sound as possible, and the KD-R80BT doesn't give you that control.

Another downside to the KD-R80BT is the interface. While the faceplate has few buttons, it's not a very practical design. It comes with two USB ports for music players, flash drives and mobile devices, but both USB ports are in the rear, which means you have to install an extension cord through your interior so that you can access the ports. The AUX port, which allows you to play any analog signal through the receiver, is also in the rear. If you want to play a CD, you have to find a tiny button that flips the faceplate down, as the CD port is behind the faceplate instead of incorporated into it like it is with most car stereos. The easiest playback option is Bluetooth, but this sacrifices audio quality.

The JVC KD-R80BT has a good amplifier with a high continuous power rating. The audio quality is good but has only three EQ presets, which means that you don't have a lot of control over the sound. The interface isn't very practical with the USB and AUX ports in the rear and the CD player behind the faceplate. You're better off just streaming audio from your phone via Bluetooth than you are playing a CD on this car stereo.