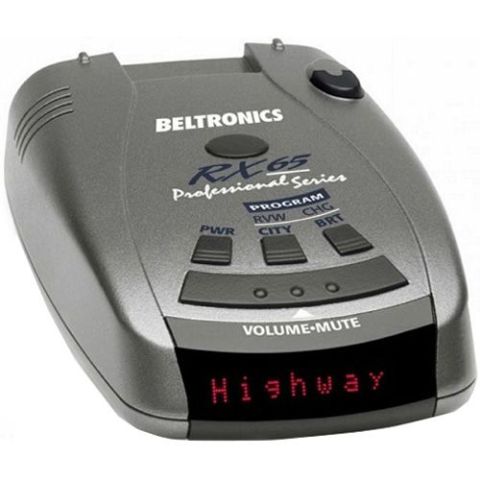 The Beltronics RX65 is a reliable laser radar detector, but it can't alert you to speed traps, speed cameras or red-light cameras.

The Beltronics RX65 is a straightforward radar detector that's easy to master for beginners to radar detection. It doesn't come with a fancy display, and it only has a few buttons that control the three sensitivity settings. It comes with either a red or a blue display. The only difference is the blue display costs a little extra because the blue light is less noticeable at night, which is important if you're concerned about avoiding unwanted attention. However, both models are capable of operating in dark mode, which turns off the display so that you only hear alerts.

The RX65 has three sensitivity settings – Highway, AutoScan and City. The Highway setting turns off all the filters, alerting you to any radar within two to four miles. The AutoScan setting turns on an internal computer that uses digital signal processing to analyze all the detected signals to detect false alerts from real threats. The AutoScan setting is recommended for most driving, but it's not perfect. You can still receive many false alerts, especially in urban settings, where garage door openers and motion detectors are common. In this case, the City setting works best by reducing or removing the X-band from detection, because this causes the most false alerts.

It's also a laser radar detector, otherwise known as a LIDAR (light detection and ranging) detector. LIDAR guns use a narrow beam of invisible infrared light to measure your car's speed. It's very accurate and allows police officers to target individual cars, which means that the car next to you on the freeway could have a laser on it and you wouldn't know it. This also means that if you receive a LIDAR alert, the police officer already has your speed by the time you've looked down at your speedometer. The value of a LIDAR detector is in knowing that you should adjust your speed in the hopes that the officer will see the decrease in speed and move on to another vehicle.

While the simple design is effective for drivers who are new to radar detectors, the lack of GPS is its greatest flaw. The best radar detectors help you avoid speed traps, speed cameras and red-light cameras by using GPS. Without the built-in GPS, you're only alerted to active traffic cops. It won't learn where false alerts repeatedly occur. You can't mark locations you suspect are speed traps or receive locations from other users.

The Beltronics RX65 is an excellent radar detector if you've never owned a radar detector before. It's simple but effective. However, the lack of GPS capabilities severely limits its ability to keep you aware of potential threats like speed traps, speed cameras and red-light cameras.