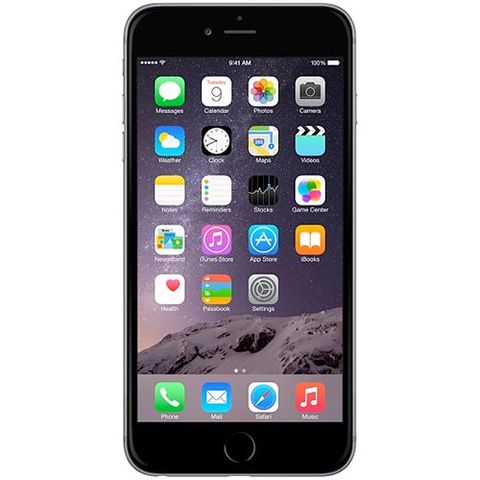 The iPhone 6 Plus is the best phablet we've ever reviewed. It's bulk and heft can be a real nuisance, but everything else about Apple's latest is amazing.

Editor's Note: Apple recently unveiled details on its next two flagship phones, the iPhone 6s and iPhone 6s Plus. Along with speedier processers and improved graphics capabilities, both phones will sport updated Touch ID sensors, 12-megapixel cameras capable of shooting 4K video, and a new innovation in the smartphone world: 3D Touch. By using force sensors that can detect how hard you push on the iPhone's screen, 3D Touch will let you peek into notifications, emails and apps with pressure-based gestures.

You can preorder the iPhone 6s and 6s Plus as of September 12, while the devices themselves will arrive in stores September 25. Top Ten Reviews will get you our official reviews and comparisons of each model as soon as we get our hands on them.

Editor's Note: This review has been removed from our side-by-side comparison because it no longer ranks as a top 10 product. The original review is below, but check out our current top 10 about Smartphones here.

That Apple makes superlative smartphones is nothing new; the Cupertino-based company has set the gold standard for mobile design ever since it debuted the iPhone in 2007. But in the iPhone 6 Plus, Apple is walking a path it's never trodden before. This is the company's first phablet, a pocket-stretching smartphone/tablet hybrid that trades comfort for functionality and raw power. You get a very large screen and a beefy battery when you buy a phablet, but making phone calls can be awkward.

Whether you prefer phablets over smaller smartphones is a matter of personal preference, as both form factors having their advantages and drawbacks. If you're looking for a more discreet Apple device, there's always the iPhone 6. But we review phones on their own merits, and the iPhone 6 Plus is unquestionably meritorious. Its processor tore through our benchmarks, its battery lasts through two days of use, and its camera turns every photo into a set piece.

Wide and tall though the phone may be, it's also very thin. Just .01 inch thicker than the iPhone 6, the 6 Plus is easily the thinnest phablet we've encountered. Its aluminum chassis is a pleasure to hold, with a soft, almost silken finish.

The phone's 5.5-inch, 1080p screen is a window to iOS 8, the latest iteration of Apple's elegant mobile operating system. Along with a couple simple interface improvements and some new messaging features, iOS 8 introduces a wealth of under-the-hood enhancements. HealthKit consolidates all your health and fitness information to a single location, and gives third-party apps an easy way to share that data, should you choose. You can substitute Apple's keyboard for new ones, install little app widgets in the Notification Center, and even set up customized quick-sharing options.

One of the operating system's best features, Continuity, lets you hand off phone calls, text conversations and documents between your phone and your Mac. It's only available if you have OS X Yosemite installed, and you have to be on the same Wi-Fi network, but we use it every day at our office, and we love it.

As Apple is fond of reminding us whenever it announces a new phone, the iPhone is the most popular camera in the world. That might seem surprising, given its shooter's generally low specs – recent iPhone generations have all sported the same 8-megapixel sensor and ƒ/2.2 aperture, which is rather average if you only look at the numbers. But as Apple's repeatedly proved, numbers don't make a great camera; great pictures do.

The other camera feature introduced this generation is phase-detection autofocus. Apple markets it as "Focus Pixels," and technology aside, it helps the camera refocus almost instantaneously.

Apple remains the only company that's introduced 64-bit processors into its smartphones, and while that will soon change, right now it gives them a leg up on the competition. The iPhone 6 Plus stormed through our benchmark tests, getting a score of 55880 in AnTuTu, a 1430 in Basemark, and hitting 31.3 frames per second in GFXBench's Manhattan On-Screen test. If those numbers don't mean anything to you, take our word for it: They're really, really good.

And it's no surprise. While iPhones have long run on comparatively simple hardware – both the iPhone 6 and 6 Plus only have a 1.4GHz processor and a single gigabyte of RAM – it's heavily optimized and integrated seamlessly with the operating system. And with Metal, Apple's new framework for games that lets them have low-overhead access to the smartphone's graphics processor, even the most intense 3D experiences run buttery-smooth.

The perennial weakness of the iPhone is its battery. Generally, battery life correlates directly with battery size, and earlier iterations of Apple's flagship were all comparatively small in stature. You were lucky to get a full day out of the devices, and Apple fans got used to plugging in halfway through the day or investing in third-party cases with built-in batteries.

The iPhone 6 Plus's sizable frame packs a 2,915 mAh battery, which lasts far longer than current Android flagships – even the LG G3, which also sports a 5.5-inch screen. By the numbers, the 6 Plus officially lasts up to 12 hours when surfing the web, 14 hours when watching video, or 24 hours when talking on the phone. With typical usage, you can expect to get through about two solid days of use before needing to recharge. If you charge your phone overnight, you'll never have to worry about battery life.

We're also really enjoying Apple Pay. Apple's take on secure, NFC-based payments, Apple Pay lets you buy something at a store by hovering your phone over a small scanner and confirming the purchase with Touch ID. The service is secure, protecting your identity by using one-time credit card numbers, encrypted confirmation numbers, and Touch ID in every transaction. But unfortunately it's not yet as pervasive as we'd hoped when it was first announced.

This is Apple's iPhone 6 Plus. Like other phablets, it's huge, but it's still far thinner than most. Like all the best smartphones, it's fast, and the 6 Plus has solidified its place with the top performers in our benchmark rankings. Yet what sets the iPhone 6 Plus apart isn't its size, or its power, or its battery life, or even features like Touch ID and Apple Pay.

Rather, iPhones enjoy enormous popularity because they offer the widest selection of top-tier apps. They take the most consistently beautiful photos of just about any smartphone, and Apple's integrated ecosystem sets the performance bar high. True, the iPhone 6 Plus isn't a perfect phone. Its tendency to warp very slightly in pants pockets may not affect usability, but it’s still an irritant. Given the option, though, we'd recommend the iPhone every time. It's powerful, fun, and one of the finest smartphones in the world.