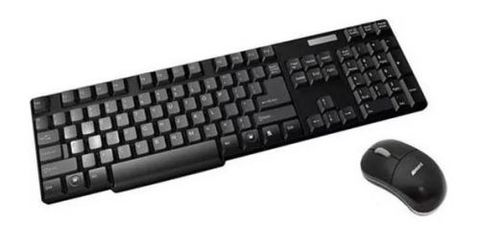 The Inland Pro Wireless 2.4GHz keyboard and mouse combo is a useful model, but it doesn’t have any special features that set it apart from the standard keyboard that comes with any desktop. While it isn’t the best wireless keyboard and mouse in our lineup, our reviewers felt the keyboard was comfortable and functional.

The Inland keyboard doesn't have any special features you might find on some of the best wireless keyboard and mouse combos such as media buttons, a wrist rest or even good battery life. It operates on a single AAA battery and can last up to one year, according to the manufacturer. The same goes for the mouse. Other wireless keyboard and mouse combos can last up to three years on a set of batteries.

The all-black wireless keyboard features silicone switches underneath the keys. This makes for a soft touch when pressing on the keys. The keys are also slightly concaved, giving your fingers a better shot at gripping and pressing the correct key. At 2 mm, this wireless keyboard actually has one of the better switch actuation points compared to other keyboards in our lineup. We saw actuation points as deep as 4 mm on some keyboards. Since you don't have to press the key down as far, this enables you to type a little faster while the slightly concaved keys keep you from making errors.

To gauge how comfortable each keyboard is to use, many of our reviewers used wireless keyboards for an extended period of time. After that period, we accumulated all of the ratings from our reviewers and averaged it to a grade. Although comfort is subjective, with a large number of reviewers we were still able to come to a strong consensus on which keyboards are comfortable to use. According to our testers, the Inland is average when it comes to comfort. In fact, many of the reviewers pointed out that nothing really stands out while using this keyboard.

The mouse was a different story. Again, after many of our reviewers used each mouse, they determined that the Inland wireless mouse is uncomfortable. It's a smaller mouse than all of the others. While others provide a place for your palm to rest, this one uses a claw type grip that our testers generally felt was uncomfortable. Even reviewers with smaller hands found it to be uncomfortable.

We also tested how well the mouse operates on different surfaces. We found the Inland wireless mouse operates best on wood, laminate and even denim surfaces. The cursor wouldn’t even move on a glass surface and really struggled on a marble countertop, displaying lots of lagging and non-responsiveness. On carpet, it actually fared quiet well. Carpet caused the mouse to jump from time to time, but overall we were impressed with its performance on carpet. However, for the most responsiveness, stick to wood and laminate.

The Inland Pro Wireless 2.4GHz keyboard isn't anything special. It looks and feels like a keyboard that comes with any standard desktop, except it's wireless. It doesn't have any media buttons to control your computer's music or volume, nor does it have a wrist rest. Many of our reviewers liked the concaved keys, and the low actuation point makes for swift typing. The mouse is also generic and functions well on a handful of different surfaces, including wood, laminate and denim. This keyboard won't wow anyone, but it's an inexpensive way to cut the cord and free yourself from your wired keyboard and mouse.