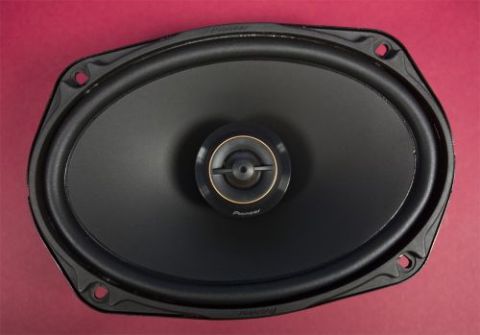 The Pioneer TS-D69F has a high-quality construction, but it didn't perform as well as other Pioneer car speakers in our tests.

The Pioneer D-series of car speakers was designed to produce the widest range of frequencies. Indeed, it has the widest frequency response range of any speaker I've reviewed, reaching a low of 33Hz and a high of 42kHz, which is far beyond the scope of human hearing. However, while the TS-D69F model from the series performed well enough to be a good improvement over most factory-installed speakers, it didn't impress us enough to rank as one of the top 10 coaxial car speakers.

It performed best in the highs, receiving an A- grade for accuracy. This is to be expected with a frequency response that reaches 42kHz. However, it received a C for accuracy in the midrange frequencies and a C- for the low frequencies. This makes for unbalanced audio performance where the highs tend to slice through the mix, though this could be preferable for some.

The TS-D69F was the least efficient speaker I tested, earning a C- in the comparative loudness test. During this test, I measured the volume the speaker produced at various stereo settings and compared it to other speakers’ output on the same settings.

However, its below-average performance wasn't surprising – the TS-D69F’s sensitivity rating is 87 dB, which is the lowest of the speakers we reviewed. It's not a highly efficient speaker at converting power to volume. That said, it's capable of getting very loud. Despite being comparatively quiet, it still broke the 100-dB barrier when connected to a standard 200-watt car stereo. That's plenty loud enough to cause permanent hearing damage.

The D-series isn't as comprehensive as it has been in the past. Currently, the series has several 6 x 9-inch speakers, a 6 x 8-inch speaker and several 6.5-inch speakers, but it's lacking a 5.25-inch speaker, which is a common size. However, it's one of the few speaker series that also has subwoofers.

The Pioneer TS-D69F has excellent highs, but its midrange and lows are subpar. This leads to an unbalanced mix where the highs dominate. When you consider its subpar grade in the comparative loudness test and its average power handling, it's clear why the Pioneer D-series didn't crack the top 10. Pioneer has better performing options.