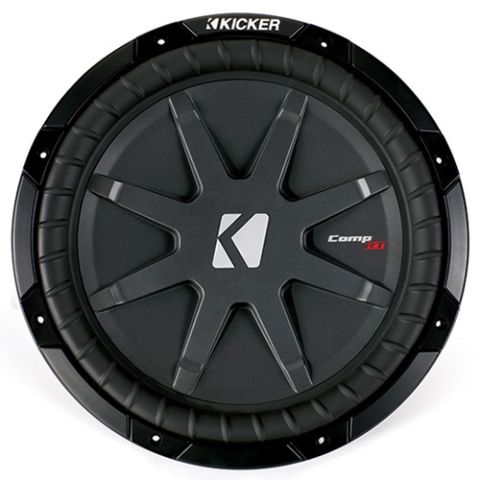 The shallow-mount design of the Kicker CompRT subwoofer provides booming bass with a minimal amount of space, making these car subwoofers easier to install in tight places.

One of the issues with adding a subwoofer to your car audio arsenal is the size. Creating low-end frequencies requires a speaker that can really move the air around, which causes many subwoofers to look like mini cannons. That's not the case with the Kicker CompRT series of car subwoofers. With half the mounting depth of most subs, you can install them in tight places where the average subwoofer wouldn't fit. A sealed enclosure only requires 0.5 cubic feet of space, while the ported enclosure requires 1.75 feet of space.

The low end that the CompRT subwoofers produce is booming, especially considering the mounting depth. The frequency response is slightly below average, with the 12-inch subwoofer and the 10-inch subwoofer reaching down to 25Hz. However, the high frequency reach of 500Hz means that it can boost the low-mid frequencies, where you hear much of the warmth in a guitar or male vocals, though doing this can also lead to a muddy mix.

The sensitivity rating is 87.1dB, which is slightly below average. This indicates how efficiently the subwoofer converts power to volume; using 1 watt of power, the subwoofer measured 87.1dB of volume output at 1 meter. For comparison, the Pioneer Champion and Infinity Reference, the two top subwoofers that we reviewed, both have a sensitivity of 96dB. Since every 3dB increase of a sensitivity rating requires half the power, the CompRT subwoofer would need 100 watts to produce the same output of a 96dB sub using only 12.5 watts. This doesn't mean you can't shake the rearview mirrors off the cars next to you; the speaker simply requires more power to do so.

The Kicker CompRT subwoofers have a shallow-mount design that allows you to install them in smaller enclosures than the average subwoofer requires. The lack of depth doesn't sacrifice too much fullness, though, as the bass definitely booms with the high power-handling ratings. The power-handling peak makes up for its low sensitivity rating.