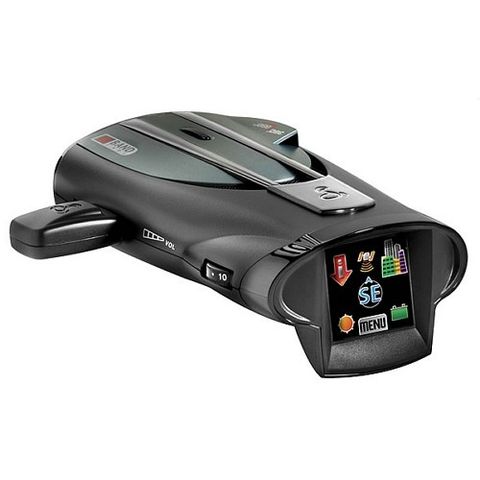 A good, affordable radar detector that detects all radar and laser bands.

The Cobra XRS 9970G radar detector will not only alert you to the presence of radar and laser, but with GPS it also warns you of red light and speed cameras. Of course the GPS functionality is not unique to the Cobra radar. It also includes an exciting features called SmartMute that can sense your engine's RPMs in order to mute alerts at slower speeds.

In order to warn you when you are approaching a fixed camera location, the GPS-equipped Cobra XRS 9970G radar detector needs to know where they are. Most fixed cameras use pavement sensors rather than radar emissions to measure vehicle speed. Even the best radar detectors cannot detect fixed cameras if the cameras do not use radar guns. Cobra uses the Aura Database to keep track of existing and newly installed speed and red light cameras. Lifetime database updates are free and are available from the Cobra website.
The 9970G can detect the X, K, Ka and Superwide Ka radar bands as well as six different laser signals. In addition, this device can detect the Ku radar band, which is used in some European countries. The detector allows you to select which bands are enabled for detection. This means you can disable the X band because it is not used by law enforcement very much, which should help to reduce false alerts.

The Cobra XRS 9970G radar detector includes a feature called SmartMute, which senses your engine's RPMs and knows when you are moving at slower speeds. When you are driving slowly or stopped, the SmartMute feature automatically mutes all alerts.

Cobra radar detectors include a feature called IntelliShield Highway/City Modes. In Highway mode, the detector responds to all bands. The City mode reduces false alerts that may be received from microwave towers and automatic door openers.

The Cobra XRS 9970G performs well when detecting radar bands and lasers. It does not have the strength or the range of our top performing radar detectors, but it is still very good. It also gives you fair warning and plenty of time to alter your speed if needed.

The unit also does a good job of alerting you to fixed speed and red light cameras. However, we have found that some fixed cameras are missed because they have not been included in the database. According to the Aura Database provider, the database is constantly updated and can be accessed 24 hours a day, seven days a week. However, we have seen reports from independent studies that show that the 9970G missed fixed cameras that had been installed for months. If fixed cameras are missed, you can enter them manually so they are stored in the database to warn you the next time you drive by.

The full-color touch screen is a nice idea, but it requires you to look at the screen while driving to interpret what is being displayed, and you shouldn’t be distracted by a radar detector or anything else while driving. In addition, if you have big fingers, it might be kind of hard for you to select the exact feature or function you intend when touching the screen.

Cobra offers a one year limited warranty for all of its radar detectors. This warranty covers defects in materials and manufacturing. Cobra will replace or repair defective products free of charge.

If you have problems, Cobra offers a toll-free telephone support system that includes an automated help desk, which is available 24 hours a day, seven days a week. If you want to talk to a customer support representative, you can call their toll-free number Monday through Friday between 8:00 a.m. and 5:30 p.m. Central Time.

The Cobra website includes links to help you troubleshoot problems with loading the USB driver on Windows 7 or Windows XP. You can also download free updates to the fixed camera database and the software required for communication between the computer and the XRS 9970G. In addition, there is a FAQs page to help you find answers to the most common questions about Cobra radar detectors.

The Cobra XRS 9970G radar detectors perform very well and can detect several different radar bands used by law enforcement. The unit also has descent range and can give you early warning to possible threats. The product's color touch screen is unique and provides a lot of good information, but it could possibly be distracting and hazardous if you have to take your eyes off the road too often to press the correct icon on the screen.