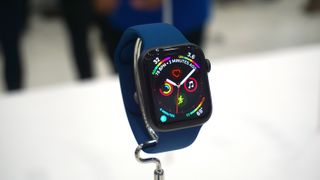 Finding the cheapest Apple Watch deals is our mission today. Chances are, you’ve already got a lovely iPhone, and you’re looking to partner it with one of the most highly-rated smartwatches money can buy.

Quality Apple products don’t come cheap (ok, this isn't exactly breaking news), but our team of Apple Watch deals experts – along with our dedicated price comparison technology – are continually searching the best retailers to find the lowest Apple Watch prices for you. And at this time of year, you never know, Amazon and Apple might just partner up to deliver a cheaper Apple Watch as one of this year's best Amazon Prime Day deals. If they do, you'll find that offer below.

We’re not just here to talk about the best Apple Watch deals though: at the bottom of this article, you'll find pro advice on which is the best-value Apple Watch and which has the lowest prices.

The right choice for you, of course, depends on why you're looking to buy a smartwatch. Do you want the super-modern and very health-focused Apple Watch 4 and its Nike+ variant? Maybe you’d prefer the still-excellent Apple Watch 3, which is seeing some superb Apple Watch deals at the moment?

The Apple Watch 2 is an outside bet nowadays, seeing as unused units are hard to come by and the Series 3 offers better value. We’ve got you covered if you’re curious about the cellular/LTE options you’ve heard about, too, and would like to enjoy the Apple Watch’s benefits without having your iPhone nearby all the time.

You’ll see that most of the watches come in two different sizes: this refers to the display size, and you’ll often find the larger models have a slightly bigger strap too. Most retailers seem to save the best cheap Apple Watch deals for the smaller versions – but there’s not a massive difference between the two sizes in all honesty.

The best-value Apple Watch with the best deals

The older Apple Watch 3 (new MSRP is now $279) is still readily available and is actually kind of a bargain nowadays. Yes, we just said ‘Apple’ and ‘bargain’ in the same sentence without being sarcastic. Since the Series 4 was released, you can regularly get the 38mm version for $199 at Walmart for example. The display is slightly smaller, and the speaker’s a bit quieter on this older model – and you don’t get the ECG and fall-alerts either. But otherwise it’s very similar to the Apple Watch 4. If you’re an Apple fan wanting to try out the world of smartwatches and you're looking for the best cheap Apple Watch deals, this is absolutely the place to start.

A considerably cheaper cellular Apple Watch than the newest model

Like we mentioned earlier with the Apple Watch 4 Cellular, the Apple Watch 3 Cellular (MSRP is now $379) allows you to use online features like taking calls, text messages and music streaming without having your phone nearby. And yes, you’ve still got an extra monthly fee to pay to your carrier for the privilege. But on the plus side, the Apple Watch 3 Cellular is a lot cheaper than the Series 4 Cellular. We’re talking roughly a $100 difference between this and the non-cellular Series 3 though; you'll find better Apple Watch deals on the model above. If you really need the cellular features though, this version offers the most value for most users.

The best smartwatch Apple has ever made

The newest Apple Watch 4 (MSRP starts at $399) sports a louder speaker and slightly slimmer build, but the display is actually a few millimeters larger than those on the 3 Series thanks to thinner bezels. These elements make things a touch easier to read and hear, but the biggest improvements are the raft of health-features. After extensive testing, we found it to have the best fall-detection of any of the best medical alert smartwatches, and it’ll alert the emergency services for you too. Apple also recently released an app that unlocks the smartwatch’s electrocardiogram skillset. The Apple Watch 4 isn't cheap, of course. If you don’t require its fresh benefits, you could save a lot of money by opting for an Apple Watch 3 deal (below) instead.

The Cellular Apple Watch 4 model (MSRP starts at $499) doesn’t need to be tethered to a nearby iPhone to enjoy the online features or receive calls/texts. It's more expensive though – you won't find the cheapest Apple Watch deals on this one – and requires an additional monthly fee from your carrier, usually starting around $10. On the plus side, you can stream Apple Music directly from your watch, and leave your phone when you go out for a run or hit the gym. It’s the biggest selling point for anyone with an active lifestyle. If you’re happy exercising with your phone, or maybe just downloading some tunes directly to the watch or a small MP3 player, we’d stick with the regular GPS version above instead, as the rest of the features are the same.

Aimed at fitness fans, the Apple Watch 4 Nike+ (MSRP starts at $399) has a few tempting extras and shouldn’t cost you any more than the standard Apple Watch 4 deal prices. First up, you can get it with silicone straps with holes in for more breathability during exercise, or there’s another option that includes a strap that reflects light in the dark, which is great if you’re a night runner. There a few unique clock faces to download too. Otherwise, it’s the same excellent smartwatch as the Apple Watch 4. Stock of the older Apple Watch 3 Nike+ edition has really dried up in recent times, with most of the prices we’ve seen lately being for used models. So it looks like you’ll need to stick with the latest version if you don’t fancy one that’s potentially seen a lot of someone else’s sweat.

We’re going back a few generations now, and cheap Apple Watch 2 deals (previous MSRP was around $260) are seriously drying up. Stock still classed as ‘new and sealed’ is often priced more than the Apple Watch 3 due to its rare nature – despite the 3 series clearly being superior tech. However, it’s worth keeping an eye out for discounted, used, or refurbished Apple Watch 2 models, because you might be able to get one for under $200. Generally though, the savings haven’t made it quite worthwhile to choose the Series 2 over the 3. And as for the original Apple Watch, the same applies – but decent stock is even harder to find, so we’ve not included it in this roundup of the best cheap Apple Watch deals.

Which Apple Watch Should I buy?

Best fitness trackers: Get fitter faster with these wearables

Best exercise bikes: these fitness bikes will get you in shape

When we examine the current Apple Watch deals across every model, the Apple Watch 3 stands out as the best value purchase. It’s significantly cheaper than the Series 4 line, and has been for some time now thanks to a few persistent promotions at leading retailers. A few impressive health-benefits aside, not enough has changed with the Apple Watch 4 for the big difference in price to be worth it for most smartwatch fans.

If you see a decent discount on the Apple Watch 4 though, it's admittedly the best smartwatch Apple’s ever made. Sure, the 3 Series has heart-rate monitors and step-counters built-in as standard, but the Apple Watch 4 takes things up a notch by adding an ECG app, along with very accurate (and not over-sensitive) fall detection, with easy options to cancel any false alarms before the emergency services are contacted on your behalf. These features do require a modest bit of tech-savviness on the users part though, and an iPhone of course.

If having your Apple Watch’s online skills tethered to your phone sounds a bit annoying, especially if you want to wear your smartwatch during exercise without your phone bouncing around with you too, then the Cellular/LTE models might be right for you. Be wary of a large price jump on both the Series 3 and 4 models for this feature though, plus an extra monthly fee from your carrier for the benefits.

As for the Nike+ model, it’s the same price as the standard models, and could be worth a look if you like the design. The differences are just aesthetic though at the end of the day. And as for the Apple Watch 2, we’re just not seeing prices low enough or regular supplies of unused stock for it to be a model we whole-heartedly recommend any more.