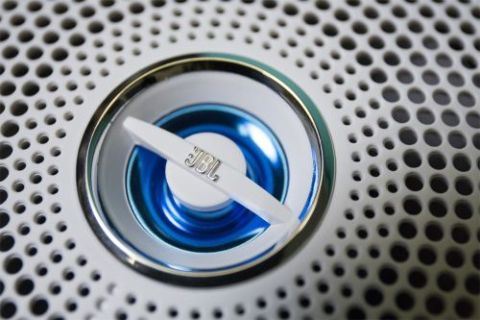 The JBL MS6520 is an excellent affordable upgrade to your boat speakers, but it lacks the low-end audio, power handling and durability of the best boat speakers in our review.

With many audio speaker brands under the Harman International umbrella, JBL is one of the most popular brands, trusted for its affordable audio quality. And that's exactly what you get with the MS6520, the best 6.5-inch marine speaker from the MS series of marine speakers. This speaker isn't the best-performing boat speaker, but the efficiency might surprise you and the audio quality is excellent when you consider the low price.

I tested the speaker's audio quality by recording the MS6520 playing a sine tone that transitions from 20Hz to 20kHz. I used this tone because it represents the range of human hearing and it isolates the speaker to the frequency being played, which makes it easier to evaluate the low, midrange and high frequency performance. I used a frequency analyzing filter to create the average frequency signature of the looped recording. By comparing this with the original frequency signal, I could grade the lows, mids and highs for accuracy.

The good news is that the audio is very balanced. No frequency range is particularly dominant, which is important for any speaker. And while the performance doesn't compare to more-expensive speakers such as the Fusion FR6022 and Clarion CMQ1622RL, it's very good for a speaker that costs less than $75. The lows and mids received B's and the highs received a B-. The bad news is that the highs can be harsh at high volumes. It can quickly lead to ear fatigue and even headaches. The highs were causing me to wince, though not nearly as much as the highs on the Rockford Fosgate Prime speakers.

The sensitivity rating is 90 dB, which is average for a marine speaker. However, the MS6520 was the second-loudest speaker in my comparative loudness tests. Since sensitivity ratings are often debated by audiophiles (because manufacturers are always going to use ratings that best reflect the speaker's efficiency in an optimized environment), I measured the volume of each speaker when connected to the same stereo and using the same power. In this test, only the Clarion CMQ speaker was louder. Since environmental influences such as altitude, humidity and air pressure can affect these measurements, it's worth noting that I tested all of the speakers in the same room.

The JBL MS6520 is an affordable upgrade to your factory-installed marine speakers. While the audio performance isn't the best, it's very good for the price. The most surprising feature, however, is how loud the speaker was in our comparative loudness test. It was the second-most efficient speaker, despite an average sensitivity rating.