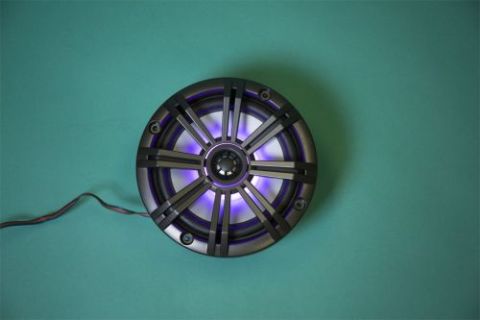 The Kicker KM654's customizable LEDs are excellent for setting the mood of a party on your boat, and the bass audio quality is good, but the volume output is poor.

There are two 6.5-inch marine speakers in the Kicker KM series – the KM652 and the KM654. The only difference between these speakers is that the KM654 has customizable LEDs and costs about $20 extra. I tested the KM654 to compare it with another other marine speaker that features LEDs (Wet Sounds XS65ic-RGB), as this is an emerging accessory trend in the market. While both feature an excellent light show, the Kicker KM654 didn't perform as well in the audio performance part of the tests.

I tested the Kicker KM654 by playing a sine tone that transitioned from 20Hz to 20kHz. I chose this tone because it represents all of the frequencies you can possibly hope to hear, and sine tones isolate the frequency performance, which makes it easier to evaluate the low, midrange and highs. After recording it playing this tone for five minutes on a loop, I used a frequency signature plugin to create the average frequency signature. Then I compared it to the original frequency signal.

The Kicker KM654cw was disappointing in our comparative loudness test. With a name like Kicker, I expect it to really kick when the volume is turned up. And yes, the speaker is capable of getting very loud, but when I measured the volumes of each speaker (at one meter) when connected to the same stereo, the KM654cw was the quietest speaker. With an average sensitivity rating of 90-dB, I expected it to place somewhere closer to the middle of the pack.

The Kicker KM series of boat speakers is extremely durable. As with most marine speakers, the woofer is made of waterproof polypropylene. The tweeter is made of titanium, and the grille and basket are made of Santoprene rubber. It's certified by the ASTM for fog, salt and UV resistance, which means you can trust it to survive harsh marine environments.

The light performance is identical to the Wet Sounds speaker. Both have the same colors and both require additional wiring that is complicated. However, it comes with a wiring diagram, installation guide and noncorrosive mounting materials. The only installation feature it lacks is a cutout stencil. It has a cutout diameter of 5.12 inches and a mounting depth of 2.83 inches. It fit our 5-inch cutout for our testing box without a problem.

While the bass response of the Kicker KM is above average, the rest of the audio performance lacks balance and clarity. In addition, the power-handling specifications aren’t great, so you shouldn’t expect it to send tunes past your wake. However, it has certified marine-grade durability, and if you’re willing to spend a little more, you can have colorful LEDs to really turn up the ambiance of your boat party.