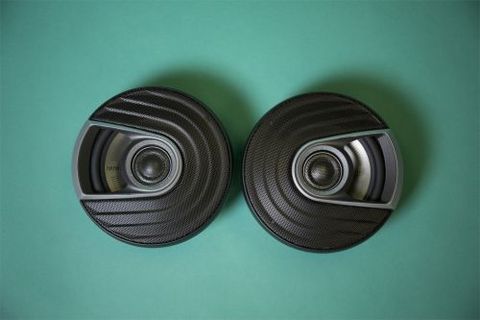 The Polk MM652 is one of the best marine speakers available because it combines high-fidelity audio with excellent power handling and marine-grade durability.

Polk routinely produces some of the best marine speakers on the market, and the Polk MM1 series is no exception. The 6.5-inch MM652 features the best power handling of any boat speaker, so you know it's capable of pushing the music past the wake, and the audio performance received high marks all around. When you consider the marine-grade durability, it's clear why these speakers are among the best.

The MM652 received an A- for the overall audio quality. By comparison, only the Fusion FR and Clarion CMQ speakers received higher overall scores. The quality, however, was similar to the Fusion speakers, with the audio profile featuring excellent high-end and midrange performance, but faltering a little with the low-end. That said, the MM652 has a unique grille, featuring a port that works similarly to a port on a subwoofer box. As a result, the port adds a little punch to the bass. It's less accurate, but more aggressive. And some people prefer this embellishment.

In the frequency accuracy test, I recorded it (without the unique grille) playing a sine tone on a loop that transitioned from 20Hz to 20kHz. Then I used frequency analyzing software to grade the low, midrange and high frequencies. The highs and midrange received A's, while the lows received a B- grade. As with the FR6022, the audio with this speaker would be exceptionally good if paired with a subwoofer, but it's still very good without.

The most impressive feature of the MM652 is the power-handling specifications, which are the best that I've reviewed for marine speakers. The sensitivity rating is 93-dB, which is better than any other speaker I reviewed. The continuous power handling rating is 100 RMS watts, and the peak power handling is 300 watts. Only the Polk DB+ has equal power handling. By these standards, the MM652 can handle more power and produce higher volumes than most speakers on the water. This is an important consideration, since marine speaker must compete with open-space acoustics, boat engines and water.

That said, the MM652 only received a B- in our loudness comparison. Despite having the highest sensitivity rating, it was only the fifth-loudest speaker. To test this, I measured the volumes produced by every speaker when using the same power by the same stereo. With a sensitivity rating of 93-dB, I expected it to be significantly more efficient at converting power to volume than all the other stereos. While it was still capable of reaching ear blistering volumes without distorting, I was surprised that it wasn't the loudest speaker.

The MM652 is among the most durable marine speakers available. It has passed all the rigorous tests for ASTM certification for salt, fog and UV protection, which expose the speakers to over 600 hours of salt spray, fog and UV rays. You don't have to worry about it being in the sun all day or getting splashed with saltwater. You could even take a hose to it if you wanted.

All the components are waterproof and noncorrosive. The front is completely sealed off, which keeps water from entering the interior. The basket and grille are made of a lightweight but stiff carbon composite, and the tweeter is made of a woven glass composite. It's tough enough to handle the bumps and shakes of a choppy sea.

Another durability feature is the sealed crossover network on the back of the magnet. This protects the wiring to the coaxial unit from exposure to humidity and fog, which can be one of the most corrosive elements that your boat has to deal with. The only missing feature is gold-plated terminals for optimal signal transfer in a high-humidity environment.

The Polk MM652 from the MM1 series of marine speakers is one of the best performing speakers. The power handling specifications and durability are impressive, but it wasn't nearly as loud as you'd expect it to be with such a high sensitivity rating.