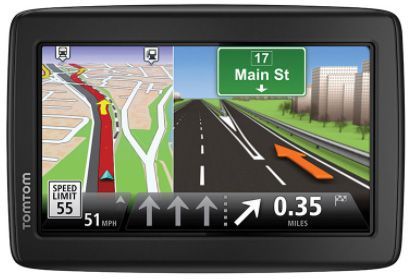 The TomTom VIA 1515M is affordable and frills-free, but it lacks a few premium features, like Wi-Fi and lifetime traffic alerts.

The TomTom VIA 1515M is one of the most affordable car GPS units in our comparison, and it offers a variety of must-have features. It comes preloaded with maps and millions of points of interest and is packed with extensive driving assistance. It even has Bluetooth so you can pair your smartphone with the GPS unit. Its lengthy battery life is also a plus, especially considering the navigation GPS unit’s low price.

The VIA 1515M ships with maps of North America already installed, including all 50 United States, Puerto Rico and the U.S. Virgin Islands. It also has 10 million preloaded points of interest – the same amount as the best GPS unit in our comparison. TomTom provides free map updates for the life of the device so that you’re always driving with the most up-to-date route information. And while you’re driving, the GPS system informs you of upcoming turns and even tells you if you need to change lanes for an upcoming turn. It displays the speed limit as well as the speed you’re driving.

While driving, you’ll see a split-screen view which shows an overhead view of your route, as well as a more detailed view that shows the lane you should be in, the name and number of the exit you need to take, and the distance until your next turn. It can display nearby landmarks on-screen so you can identify the turn. Additionally, the built-in IQ Routes feature calculates the fastest route to your destination based on current traffic speeds rather than a particular road’s average speed limit.

The 1515M has a 5-inch resistive touchscreen, with a resolution of 480 x 272 pixels, as does TomTom GO 52. Though this is about average for entry-level GPS systems, it’s not as high-definition or as responsive as higher-ranking models, like Garmin's DriveSmart 61LMT-S. Resistive screens are slightly more difficult to interact with, and generally don’t provide as clear of an image as a capacitive touchscreen does, but they do allow for a lower price point. And should you need to unplug the GPS from its DC charger, its battery lasts up to an impressive three hours – much longer than most other devices, which can only last up to one hour.

If you have questions or concerns about the VIA 1515M, you can contact TomTom’s customer service department either by phone or email. The company does not offer a live chat option. The GPS ships with a one-year warranty, which is the industry standard.

The TomTom VIA 1515M is affordable and ships with preloaded maps of North America and 10 million points of interest. Although it only has a resistive touchscreen and isn’t full high-definition, it boasts heavy-duty battery life and plenty of navigational assistance resources, making it a good option for anyone who wants a no-frills GPS.