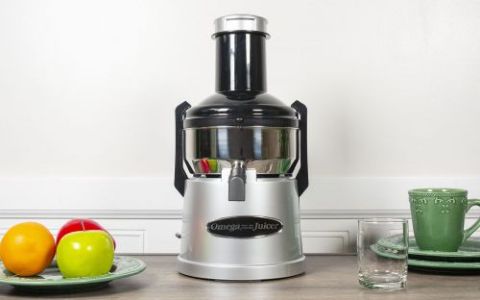 The Omega Mega Mouth BMJ330 has some quirks but it had higher juice yields than any other machine we tested.

The Omega Mega Mouth BMJ330 gave a very bad first impression but its spectacularly high juice yield won us over – mostly. It took three people to properly assemble this machine and all of the plastic seems super flimsy. Also, there is no included pitcher like with most juicing machines. It just seemed kind of like a piece of junk, but when we started juicing with it we were impressed.

At the end of the day you buy a juicer to get juice, and this machine gives you a lot of it – pulp-free and froth-free. It produced more juice out of the exact same amount of fruits and vegetables than any other machine we tested this round. We specifically weighed the produce before making each of our recipes to even the playing field. Whether we were juicing hard produce like beets and carrots or softer fare like oranges and lettuce, this machine powered through all of it and produced cup after cup of pulp-free juice. It provided 22 liquid ounces total. The average was only 14 ounces among the juicers we tested this round. It was truly impressive.

This machine was less impressive in other ways, though. It didn’t really live up to its name when it was time for the apple test. We had to cut the apple at least three times to get the pieces to fit down the chute. We were using medium-sized apples. A small apple might fit down without any cutting but a larger one certainly wouldn’t.

The Mega Mouth also was harder to clean and assemble compared to others. It really must be cleaned right after use or the little bits of fruit and vegetable stick like glue.

The long cord is a convenient plus. It means you have more options for positioning it on your countertop. It actually had the longest cord of any machine we compared.

The BMJ330 was also the very best in terms of its warranty, which goes for 10 years. If it ever stops producing its large quantities of juice you have some recourse. The length of coverage is especially impressive if you compare it to others. One machine we reviewed offers only 60 days of warranty coverage and most others offer a year. Omega stands by this product and that is nice, especially since it costs more than the rest we compared this round.

The Omega Mega Mouth BMJ330 is the most expensive juicer we tested but it also produced the most juice. It has a few design flaws that make it less user-friendly – it was relatively hard to assemble, clean and use – but at the end of the day it is great at juicing. Its long warranty also inspires a lot of confidence.