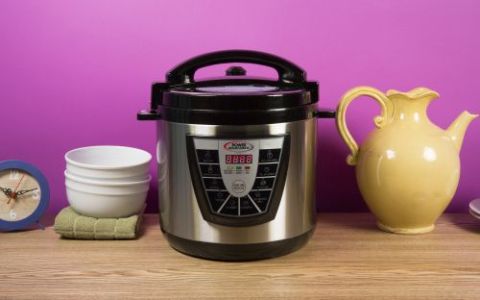 The Power Pressure Cooker XL’s longer-than-average cooking time, lack of a steam rack and short warranty make this device less versatile and much less reassuring than other devices we tested.

The Power Pressure Cooker XL 6 quart is fine for anyone wanting a simple device that can serve 4-6 people. It is easy to use and doesn’t require that you constantly reference the manual to understand how to program it. You can also purchase this same device in an 8 and 10-quart capacity if you want to serve more people or make larger dishes.

In our testing, this device didn’t perform as well as others in both the rice and the pot roast tests. The rice grains stuck to each other and burned to the bottom of the pot making some of the least appetizing rice in our testing. The pot roast was acceptable but nowhere near the pull-apart-tender level that we found with other devices. This device took the second longest to cook rice at 32 minutes and 35 seconds.

There are three different cooking options; however, this device does not offer popular cooking methods like sauté or browning, so it can’t do as much as other multi-cookers in our comparison. There are five preset food buttons, including the most popular – chicken/meat, rice/risotto and beans/lentils. This helps make it easier for you to start cooking at the press of a button instead of fiddling around with settings.

The product features a canning/preserving button, which is one of the reasons it is so popular. However, the National Center for Home Food Preservation (NCHFP) has not tested this device and therefore has not approved it. That means it is possible that this device doesn’t safely can or preserve foods. You’ll need to use discretion when deciding whether or not to use this canning feature.

Once this device finishes cooking, it automatically turns on the keep warm function so your food doesn’t get cold before you’re ready to eat it. You can also use the delay timer to plan out a meal for later in the day.

Your purchase includes a recipe book, canning guide and access to an online recipe library. Like most devices, this one comes with a measuring cup, serving spoon and steam rack. Since manufacturers tell you not to place any unapproved items inside the pot, the lack of an official steam rack is an issue. The instruction booklet indicated that we should have received a bobber, but we didn’t find one in the box or preinstalled on the device.

The non-stick pot cleaned up relatively well in our testing, but many users have reported that the non-stick coating started peeling off after only a few uses. Our own has not yet shown signs of deterioration, but that could come with more time. The interior pot is also textured, which can make it harder to clean depending on the foods you prepare.

With only 60 days of coverage, this unit has the shortest pressure cooker guarantee we’ve seen. The average warranty typically lasts for one year, while the best, like Black + Decker’s, last for two or three. As with most pressure cookers, this one has a lid locking feature so that the device only functions when the lid is properly secured. It also will not unlock unless a safe amount of pressure has been released.