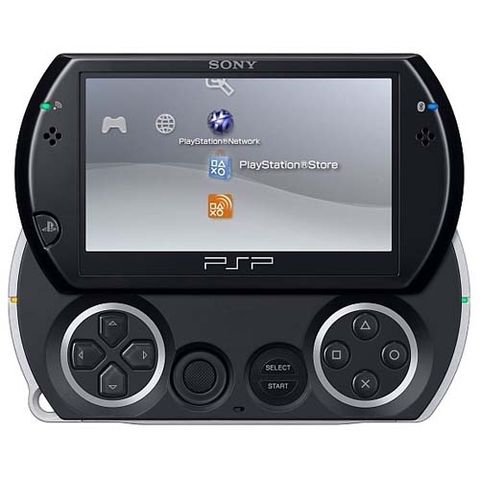 The PSP Go utilizes flash memory for game storage and is small enough to fit in your pocket or backpack pouch.

The PSP Go is much smaller than some of the other portables models Sony has come out with, but its small size has nothing to do with the power of this gaming device. Instead of using either cartridge or UMD discs, the PSP Go utilizes flash memory to download and install games, apps and other media. We feel that the overall quality and ultra small size make this a good competitor in the handheld gaming console market.

The new PSP Go includes strong improvements upon older PSP designs. This slide-style handheld game console from Sony makes it easy to watch movies or listen to music without worrying about accidentally pressing a button while it's in your pocket. The slide feature also eliminates the wear and tear of constantly flipping open your handheld device. The PSP Go offers better video and graphic output, with a lighter weight and stronger multimedia options than previous models.

The PSP Go has consistently placed a strong emphasis on video and graphic output, multimedia and advanced game play and connectivity, remaining several steps ahead of most handheld game consoles. While there is still room for improvement, the PSP system, in all of its releases, offers a near-perfect balance of gaming for both multi-player online and single player gaming. The PSP's online connectivity, web browsing and multimedia capabilities make it not only the Walkman of the 21st Century, but also the Swiss Army knife of video game consoles and handhelds alike.