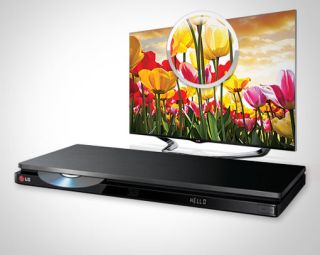 Why upgrade to a blu-ray player?

We tested 20 Blu-ray players to find the best option for your home theater. We focused on good all-around devices, streamlined for anything from 4K setups to simple and inexpensive ones. Overall, the Sony BDP-S6700 is a great Blu-ray player for most. It balances price with desirable features like streaming app support. Though more expensive, the Samsung UBD-K8500 offers native 4K compatibility and is wonderfully easy to use.

A great blu-ray player that is crammed full of apps

The Sony BDP-S6700 is the best Blu-ray player overall because of its reasonable price and rich feature set. Though it isn’t 4K-compatible, the device does support video upscaling, which enhances the image quality of your non-ultra-high-definition media to near-4K quality. It’s not quite as nice as the more expensive 4K devices we tested, but it does a great job nevertheless. The device itself is small and lightweight. It’s body is made mostly of plastic and does not have any kind of display. There are three ports: HDMI, USB and coaxial connections.

It supports Wi-Fi and Bluetooth connections as well. The latter is a good feature, as the BDP-S6700’s included remote is small and not very comfortable to use. This allows you to download remote apps that can control the Blu-ray player from your smartphone instead.

Of the Blu-ray players we tested, Sony’s App Store had the most options for streaming media. Besides mainstays like Netflix, Amazon, Pandora and Spotify, there are over 300 apps you can use with the BDP-S6700. Navigating the player’s home screen, menus and apps is easy and straightforward.

The LG BP350 is a budget-friendly alternative to more expensive models that still provides several of the features we looked for in the best Blu-ray players. It offers Wi-Fi connectivity and double functions as a media player and streaming box for popular applications like Netflix and Hulu. It is compatible with content up to 1080p, so it isn’t a good option if you have a 4K media setup, but it offers excellent picture quality and upscaling for DVDs up to Full HD.

In testing, the LG BP350 took about nine seconds to boot up when not using the device’s quick start mode, which speeds up booting by putting the player in a low-power sleep mode instead of completely shutting it off. Unfortunately, the LG player isn’t very fast when it comes to streaming services. It sometimes took 30 seconds or more to start a movie on Netflix during our tests. We did appreciate that the LG BP350 came preloaded with essential apps like YouTube. That way, you don’t have to individually search for, download and make an account for every app you want to use. The menus and search are straightforward and easy to navigate, but the default apps are a nice touch. One of the downsides of the LG Blu-ray player is its lack of dedicated audio output port, as it only has one HDMI port to connect it to your TV.

A blu-ray player that is incredible with 4K TVs

The Philips BDP7501 Blu-ray player supports native 4K and 3D content. It’s a solid, compact device that looks right at home among your high-tech home entertainment system and performs on par with the latest standards. It costs twice as much as most other Blu-ray players we tested, but it supports native 4K, instead of scaling up 1080p content. The back of the small device houses a DC power port, LAN Ethernet port, two HDMI ports and a USB port. It has a dedicated HDMI port for audio output, as many other Blu-ray players we tested did not. It is compatible with both Dolby TrueHD and Dolby Atmos.

Like most Blu-ray players, the Philips device pulls double duty as a combination media disc player and streaming box. It comes with both Netflix and YouTube preinstalled. Unlike others, however, the BDP7501 does not have an available app store to download other apps, like Spotify or Pandora. This severely limits streaming with just the Blu-ray player.

The strangely designed Samsung BD-J5900 offers the best features we looked for in a Blu-ray player, and it had the fastest startup time in our hands-on tests. The BD-J5900 took just 6.8 seconds to start, while many others took twice as long. The biggest downside of the Samsung Blu-ray player is that it doesn’t support native 4K content. It does upscale lower-res content well and provides great visuals, but it isn’t the best choice for your 4K setup.

Along with Wi-Fi connectivity, the BD-J5900 supports most popular streaming services, including Netflix and YouTube. These apps and more are available through the Opera TV Store. Aside from discs and internet streaming, the device can access content through its USB port or from the cloud, as it supports DLNA. One thing that makes the BD-J5900 stand out is its customizable home screen. It’s easy to find the apps you use most often, as you can mark your favorites to appear on the main screen.

A basic blu-ray player that is great value

At just 1.5-inches thick, the Magnavox MBP5630/F7 is a slim, compact Blu-ray player that covers only the basics. While most Blu-ray players we tested are packed with apps, upscale image processing software and features that allow for 3D content, the Magnavox device has a more bare-bones approach. This does limit its functionality to reading and playing discs, but it’s great if you don’t need all the extra features that drive Blu-ray player prices up. If you already have a streaming device, for example, you don’t need the Blu-ray player to also support streaming. It plays Blu-rays and DVDs in full 1080p HD quality but does not support 4K. It also does not have a dedicated audio output, though it does have a USB port.

The Magnavox MBP5630/F7 can give you control over the content your family watches. It does not connect to the internet, so children cannot access unapproved online movies or TV shows on it. It also has a parental lock setting. Overall, the MBP5630/F7 is a great choice for basic needs, but it lacks a lot of the extra features and functions of other devices we reviewed at a similar price point.

Blu-ray players: what we tested, what we found

As home theater hardware, Blu-ray players aren't nearly as performance-tied as product families like smartphones or tablets. Still, ease of use plays a vital role in what makes the best Blu-ray player.

In our evaluations, we measured the performance of each player in several areas. Factors like cleanly designed interfaces and quick loading speeds were strong points for our top rated Blu-ray players. If you want to adjust settings, like audio sources and subtitles, you don't want to scroll through submenu after submenu. Similarly, we factored in the boot time of each Blu-ray player on stock settings into our ratings. While boot time was only one of several data points we used – many players have quick-start settings that allow for instantaneous power on times – it can be an indicator of player performance in secondary areas.

Qualitatively, we evaluated the design and build quality of each player and its accessories. While these specifications are secondary to player performance, they still play a strong role in daily use. Poorly designed remotes or players with low-quality bodies can be an inconvenience.

Home theater setup can often quickly devolve into a mess of cables for various devices, but top Blu-ray players manage to work around these issues. Before making a purchase, consider your current home television and the cable types it needs to function. Do you want the player to use component or HDMI cables for connectivity? What audio standard does your home theater use if you have a secondary audio source? If you plan to use the player as a dedicated multimedia hub, do you want a USB port on the player?

Our hands-on testing is designed to simulate typical, real-world experiences with Blu-ray players. For our tests on evaluated players, we obtained review models through a combination of retail purchases and units provided by manufacturers. The manufacturers have no input on our testing methodology, and our rankings are not shared with them prior to publication.

Blu-ray players: what else is important?

For most home users, Blu-ray players that provide basic high-definition playback functionality will be enough. However, higher-end and mid-range models increasingly provide features that were previously only found in premium models.

4K is a display standard that refers to media that plays at a resolution of 3840 x 2160 pixels and possesses higher image quality than traditional high-definition content. TVs with 4K support display content at this higher resolution. 4K compatibility on Blu-ray comes in two formats: Players with native support can play 4K content by default, while players with upscaling simulate a 4K image from a standard high definition source. Image quality on upscaling players will be usable on a 4K television but won't be comparable to native 4K content.

3D support is also a similarly commonplace feature on most non-entry-level Blu-ray players. In order to take advantage of either feature, you'll need an HDTV that has 3D or 4K support.

It can be a hassle to bounce between multiple electronic devices, especially when you add streaming services on top of them. Whether you’re trying to build the perfect home theater, or simply want to streamline your existing setup, getting a Blu-ray player with Wi-Fi capabilities is one way to make things easier. A good Blu-ray player can connect to the internet and allow you to access video and music streaming apps – and it should support DLNA streaming in case you want to use the player to access your folder of downloaded videos and music.

A Blu-ray player with media apps allows you to switch between your physical Blu-ray collection and videos from popular streaming sources like Netflix, HBO, Hulu and Amazon Prime Video. This isn’t a necessity if you already have a standalone streaming device, like Apple TV or Roku, though it may be nice to have streaming access regardless of which device you are using.

Having DLNA streaming support is also a plus if you have your own home media server. If you use Plex or a similar service, you can play your cherished video collection through your compatible Blu-ray player without having to change devices.

It’s worth noting that if you want to stream 4K content through your Blu-ray player, you’ll need to have a compatible television and a good enough internet connection in order to properly support it. In most cases, budget Blu-ray players won’t have all, or even some, of these features. We recommend opting for a mid- to high-end player so that you have all of these options available to you whenever you’re in the mood to watch some movies.