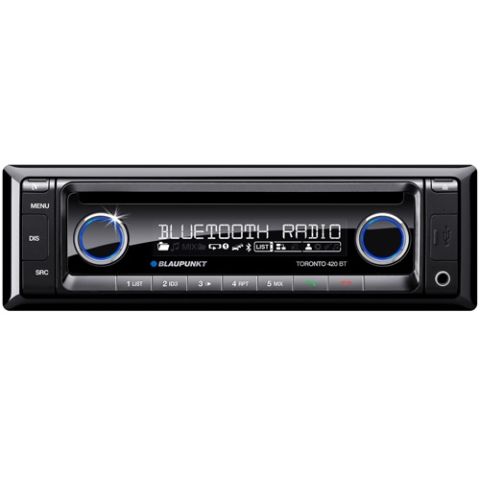 The Blaupunkt Toronto 420BT produces good audio with excellent continuous power ratings, but it lacks the control and customization that you get in better car audio receivers.

The Toronto 420BT is German company Blaupunkt's best car stereo available in the U.S. It features excellent power ratings and above-average audio quality. However, it doesn't give you as much control over the sound as the best car stereos we reviewed.

The standout feature of this car stereo is the continuous power output. While the max power rating is only 200 watts, which is the most common max power rating for car stereos, the continuous power output is 88 RMS watts. This is among the highest available for the car sound systems we reviewed. The RMS watts rating is one of the most important features because it tells you how much power the internal amplifier can send to the speakers on a continuous basis. The max wattage only tells you the amount of power it can output for brief periods. A higher RMS wattage rating means that it can handle louder volumes for longer periods than most car stereos.

The downside to the Toronto 420BT is the lack of control you have over your sound. It only has three EQ presets. These presets allows you to enhance specific frequencies to match your space or to optimize the audio for your car's acoustic landscape. Cars are notorious for having fickle acoustic landscapes. The more EQ control you have, the better you'll be able to find the optimal sound for your car. For comparison, the best car stereos have 10 to 13 EQ presets with the ability to enhance or diminish each EQ band by up to 12 dB. The Toronto only gives you 8 dB of leeway.

The Toronto 420BT gives you plenty of options for playing music, but it lacks some key options. In addition to the AM and FM radio stations, you can play CDs, which offer the best car audio, and you can stream audio from your phone using Bluetooth. It also has a USB port on the faceplate, which allows you to use flash drives loaded with music or music players like iPods. However, it doesn't support WAV or AAC files. It also lacks an HD Radio receiver and is not SiriusXM ready.

The Bluetooth connectivity allows you to make hands-free calls while you're driving. There's a built-in microphone above the USB port on the faceplate. The microphone lacks noise-canceling technology, so the call quality isn't very good for your callers. You'll hear them, but they won’t hear you very well. However, if call quality is important for you, then you can add an external microphone with noise-canceling technology by connecting to a microphone input in the rear and placing the microphone in a better position.

The Blaupunkt Toronto 420BT has one of the best continuous power output ratings at 88 RMS watts, which means it can sustain higher volumes than most car stereos. The audio quality is good, but more EQ control would make it better. It has all the common playback options, a CD player, USB port, AUX port and Bluetooth, but it lacks compatibility with WAV and AAC files. It doesn't have an HD Radio receiver or an input for a SiriusXM satellite radio receiver either.