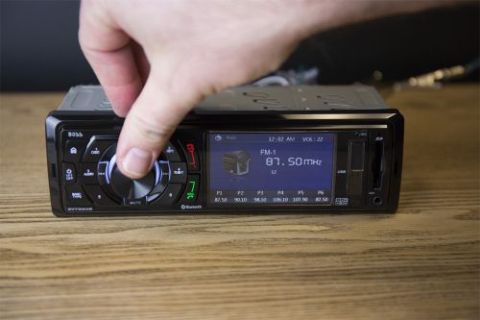 The Boss Audio BV-7260B is ideal for people who want a simple and affordable stereo upgrade and don't care about high-end fidelity.

The Boss Audio BV-7260B is a car stereo for digital listeners. Unlike high-end car stereos, it doesn't come with a CD player, and it isn't compatible with lossless formats like FLAC. In other words, it just plays MP3s and streams music from your phone or music player via Bluetooth, USB cord or AUX cord. It also doesn't have advanced features like time alignment or customizable EQ bands. If you want something simple and affordable, then the BV-7260B is a great option. However, if you have more discerning audio tastes and preferences, then you'll want to invest in one of the better stereos we reviewed.

When compared against other stereos, the Boss Audio BV-7260B earned a B- for overall audio quality. While this is one of the lowest grades I handed out, its audio quality is good enough to be an improvement over most factory-installed stereos. The main issues were its low-end reproduction and the limited control you have over the audio signal. The bass wasn't very pronounced, which left the mids and highs sounding a bit lacking. However, a subwoofer could easily fix this issue.

It also doesn’t have EQ bands or time alignment. This lack of control is concerning, since it means you can’t adjust the audio to your car's acoustics or your own preferences.

The Boss Audio BV-7260B’s best feature is its maximum power output, which is somewhat surprising when you consider the stereo’s size – not only is it a single-din stereo, but it's also the smallest stereo on the market. However, it has an 80-watt output per channel and a 320-watt max rating overall. By comparison, the Pioneer AVH-501EX and the JVC KW-R935BTS, our picks for best car stereo and best value respectively, are both rated at 50 watts per channel and 200 watts overall.

The BV-7260B’s interface received a B+ for ease of use. The bulk of the controls are on the driver's side, which is good, but they aren't as clearly labeled as those on other stereos. It has a USB and AUX port on the passenger's side, which is a popular addition for smartphone users.

However, the display is exceptional, especially for the price. It has easy-to-read text and a high pixel density, so it looks more like a phone display than a digital clock face, which is how many stereos are still designed. The display shows complex animations, for example, a race car swerving around corners. It's one of the best displays we saw, especially for a single-din stereo.

The Boss Audio BV7260B costs less than $100 and is one of the best budget stereos available. It’s missing some features, like a CD player and total lossless format compatibility, but has the convenience features many people look for – Bluetooth streaming, hands-free calling, USB and AUX ports and enough power to push your speakers. However, the audio quality simply doesn't match that of high-end stereos.