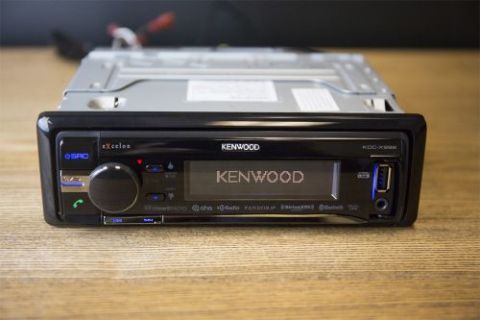 The Kenwood eXcelon KDC-X998 is one of the best sounding car stereos, but it lacks some key features a stereo at this price should have.

The Kenwood eXcelon series car stereos have been among the best audio systems on the market for a long time. While the KDC-X998 is one of the best sounding stereos, its lack of lossless format compatibility, time alignment and a modern display are concerning when you consider its high price.

When I compared the 10 best car stereos, the Kenwood eXcelon KDC-X998 earned an A+ for audio quality, tying with the Pioneer AVH-501EX – the sound is full and balanced from top to bottom. The stereo also features 13 EQ bands, which allow you to emphasize or de-emphasize certain frequencies to optimize the audio to fit your preferences and your car's acoustics.

The one audio performance feature this stereo is missing is a time alignment tool, which you'd expect to find on a stereo over $250. The best stereos, including the Pioneer AVH and the JVC KW-935BTS, use this feature to adjust the timing of the audio signals they send to the speakers. That way, the frequencies arrive at the spot you want the best sound, for example the driver’s seat, at the same time. Time alignment can make a significant difference, especially in cars with four or more speakers.

The eXcelon KDC-X998 features a CD player, Bluetooth, a USB port and an AUX port, so it can stream music from your smartphone. However, it lacks compatibility with FLAC audio files, which is a lossless format preferred by audiophiles.

In addition, it uses the outdated 2.1 version of Bluetooth. This is fine for streaming audio, integrating with apps like Pandora and making hands-free calls, but it lacks the AptX Bluetooth profile, which improves streaming quality. And with Bluetooth currently in version 5.0, it could potentially become incompatible with newer Bluetooth devices.

The KDC-X998’s interface received a B for ease of use. The buttons are all on the driver's side, which is good, but they are small and not labeled particularly well. In addition, they're partially blocked by the volume knob, which could make some functions difficult for drivers with big fingers to access.

It's the display that disappoints the most, earning a B- for quality. The variable color illumination shifts from one color spectrum to another, which is neat. However, the display uses the tired digital clock face text, which has been around for decades and isn't nearly as stylish or easy to read as a pixel display.

The eXcelon KDC-X998’s power output is average but still plenty powerful to hurt your ears. As with most car stereos in this price range, it has a maximum power output of 200 watts with a continuous output of 22 RMS watts per channel. If you pair this stereo with compatible speakers that have a high sensitivity rating, you can easily push the volume over 100 dB, which is exactly what I did in my tests.

The Kenwood eXcelon KDC-X998 is a reliable stereo upgrade with high-end audio quality, which is what we've come to expect from the eXcelon series. That said, the lack of time alignment and full lossless compatibility is a concern considering its price. In addition, the display isn’t as stylish or easy to use as those on newer car stereo models.