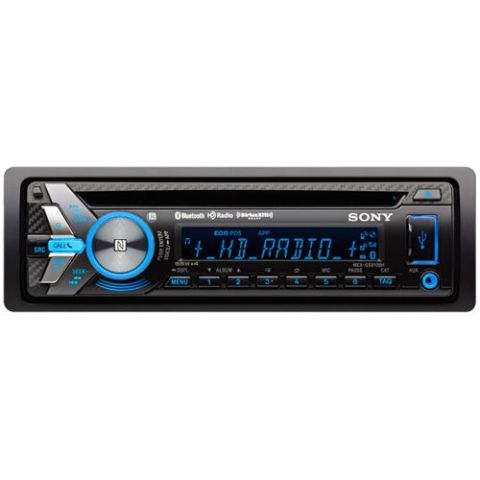 The Sony MEX-GS810BH is the best car stereo receiver because it provides the highest-quality audio with comprehensive playback options and smartphone integration.

When it comes to upgrading your car stereo, the Sony MEX-GS810BH improves everything. Not only does it provide high-fidelity audio with a 220-watt amplifier, but it also provides you with the most options for playing your favorite tunes. You can play CDs, fill a flash drive or music player with all the common audio formats, stream Pandora wirelessly with Bluetooth, and listen to HD Radio. You can also take phone calls and use voice commands to communicate with Siri and Google Now. This is why it's our pick for the best car stereo overall.

The MEX-GS810BH is rated at 220 watts with six-channel outputs to your front speakers, rear speakers and subwoofer. This is 20 watts above the average power output for a car stereo. However, the continuous wattage is only 68 RMS watts, which is among the lowest we reviewed. This only becomes an issue if your car's speakers require more power, because underpowering a speaker can cause damage to the speaker. If your car has high-fidelity speakers that require a high RMS wattage to perform adequately, you'll need to supplement your system with an external amplifier.

Each CD player in the MEX series features a 120 dB signal-to-noise ratio, which is 10-dB than the Kenwood eXcelon KDC stereo that we reviewed. This means that the desired audio signal from a CD and sent to the speakers is 120 dB greater than any unwanted signals or background noise, which is often heard as a humming noise. For comparison, the second best S/N ratio is 110 dB, and the average among the car stereos in our review is 88.1 dB. You won't hear any humming from the speakers between songs.

One of reasons the MEX series is one of the best car audio systems is the amount of control you have over your audio. Similar to the Alpine CDE stereo, It has 10 customizable EQ presets at various frequency bands, starting at 32Hz and ending at 16kHz. You can decrease or increase each frequency band by 6 dB. This allows you to adjust the bass, mids and treble frequencies to match your tastes. In addition, it has high-pass and low-pass filters from 50Hz to 120Hz, allowing you to isolate the bass frequencies to the subwoofer.

This is one of the few car radios with a built-in HD Radio receiver. HD Radio is radio broadcast in a digital signal, which means that the audio signal lacks the static and hiss common with traditional radio frequencies. The artist, album and song metadata is also contained in the broadcast. When a DJ plays a song, the metadata shows up on the display. If you hear a new song that you like, you can tag it and download it later on iTunes. It's also compatible with Sirius XM. You just have to purchase the receiver and subscription separately. HD Radio doesn't require a subscription.

If radio isn't your preferred media platform, the Sony MEX's comprehensive playback options allow you to play almost any media format available. You can play CDs, which provide the highest-quality audio. You can fill a flash drive with music, plug it into the USB port on the faceplate, and play MP3, WMA, WAV and AAC files. You can plug music players like iPods into the USB port or AUX port. You can also stream audio wirelessly from your phone or tablet via Bluetooth connection. This allows you to access and stream internet radio apps like Pandora, Aha and Spotify.

The Sony MEX connects to your smartphone via Bluetooth, which you can easily pair using the NFC feature. It features the specific controls for Pandora, allowing you to pause, play and skip songs from the stereo's display instead of your phone. It also has an app mode that allows you to control other apps, like GPS apps. If you're streaming music from your phone's memory, you can control the playlist from the display, which means you never have to reach for your phone when you want to pause, play, skip or rewind a song.

It comes with an external microphone and all the necessary Bluetooth profiles for hands-free calling. You can use voice commands to dial friends or answer incoming calls. You can have it read text messages to you, and you can dictate text messages. The display also shows the caller's name or number. The microphone features noise cancellation that filters out the road noise and echoes caused when the microphone picks up audio from the speakers. It allows you to stay connected without taking your eyes off the road. Another great feature is the integration with Siri or Google Now, which turns your phone into a personal assistant while you drive.

The Sony MEX-GS810BH is the best car audio receiver because of its stellar 220-watt audio, comprehensive playback options and smartphone integration. It comes with an HD Radio receiver and is Sirius XM ready. You can make fully hands-free calls with it as well. Whether you prefer the high-quality audio of CDs or the convenience of Pandora, it gives you more control over your car audio experience than any other car stereos we reviewed.