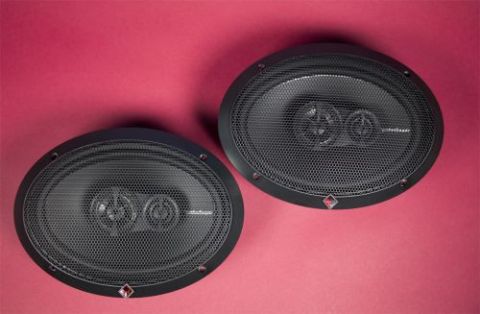 The Rockford Fosgate Prime car speakers are affordable and have above-average audio quality. However, their poor power-handling specifications are a concern.

The Rockford Fosgate Prime series car speakers have a sleek, flat-black design with glossy dome tweeters. Each speaker in the series has a vacuum-formed, polypropylene woofer; a stamped steel basket frame; and silk dome tweeters. While they certainly look high end, the Prime series has some of the most affordable after-market speakers available. And while the model we tested, the R169X3, didn’t put up impressive marks in our frequency accuracy tests, it's still good enough to be a solid upgrade over old factory-installed speakers.

In our frequency accuracy tests, the Prime series speaker received an overall grade of a B, which is good but not great. It earned a B- for its high-frequency reproduction and a C+ for its performance in the midrange.

However, it received an A- for its low-frequency reproduction. The R169X3’s bass isn't as big as that of other speakers because it is much slimmer – only half as wide as most 6 x 9-inch models. This means the woofer moves less air. Still, its low frequencies were very accurate in our tests. The only reason it didn’t receive a higher grade is its lowest audible frequency was around 100Hz, and other speakers could produce lower frequencies.

In our comparative loudness tests, the Rockford Fosgate Prime's 6 x 9-inch car speaker received a C+, which wasn't surprising given that its 90 dB sensitivity rating is below average. Since the woofer isn't nearly as deep as its competition, it struggles to move as much air. That said, the slim design is one of its best attributes because it fits almost all types of installations. Some speakers, like the Pioneer PRO, are limited in where they can be installed because of how big the magnet is and how far the tweeter sticks out.

The Rockford Fosgate Prime series has affordable car speakers that are an excellent upgrade to your factory-installed speakers. Their overall audio quality isn't going to impress you, but their low-end frequency reproduction is good. The most significant downside is their low power handling ratings, which means Prime speakers aren't for discerning listeners who prefer to turn it up.