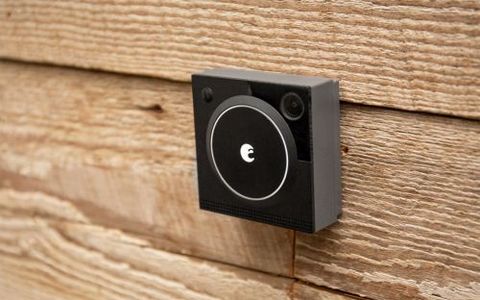 The August Doorbell Cam Pro is the most user-friendly doorbell we tested. It works seamlessly with the August Smart Lock and sets the standard for how smart locks and doorbells should work together.

The August Doorbell Cam Pro is an excellent video doorbell that lets you use your smartphone to see and speak to people at your front door. In addition to recording HD video, this model has a number of services and features that make it one of the most convenient smart doorbells around. Furthermore, the Doorbell Cam Pro directly integrates with the August Smart Lock to let visitors into your home.

To capture video, the August Doorbell Cam Pro uses a lens with a 120-degree field of view. In our video quality testing, the August Doorbell Cam Pro produced average results compared to most other smart doorbells. However, its video is still effective enough that most people won't notice the difference. Despite having the lowest video resolution in our comparison, 480 x 640, we found the vertical, portrait-style aspect ratio more pleasing and natural on a smartphone than the widescreen video of the competition. We had no problems with the audio on this doorbell camera.

At night, the doorbell camera uses a visible floodlight to light guests as it records, which can also act as a deterrent to would-be intruders. This is different than the other video doorbells we looked at, which use invisible infrared night vision to light subjects. Its nighttime video quality is quite good, but we found that the full-color video wasn't as clear as the infrared video from Ring Video Doorbell 2, Nest Hello and Ring Video Doorbell Pro.

When a visitor rings the doorbell, you can converse with them using your phone, thanks to the Doorbell Cam Pro's built-in speaker and microphone. The entire conversation, as well as any motion-triggered video clips, is recorded to August's servers. While this video doorbell comes with a free storage option, this only stores videos for 24 hours before deleting them. If you want 30-day storage you can expect to pay $4.99 per month, or $49.99 per year, to save video clips.

August Doorbell Cam Pro narrowly beat the Ring Video Doorbell Pro as the easiest video doorbell to use. For example, getting a call with the August Doorbell Cam Pro is a unique experience, since the doorbell puts live video right on your phone's lock screen when someone presses the button. It feels much like getting a phone call, which is much more intuitive than tapping on a static notification as with every other smart doorbell we tested. The camera also has a motion sensor, so it records whenever someone approaches the door and sends a notification to your phone, even when you aren't at home.

Like the other doorbell cameras we reviewed, this one works with iOS and Android devices. It also has both Wi-Fi and Bluetooth to connect to the internet and other August products. This model can replace any 12-24VAC doorbell switch as long as you have a mechanical chime, since it doesn't work with digital chimes. Unlike, Ring, the August Doorbell Cam Pro doesn't have an optional chime accessory.

Installing this doorbell takes around 15 minutes. We especially like that the mounting bracket comes with a built-in level, which ensures you don't install it crooked. Like the Ring Video Doorbell 2 and the Nest Hello this unit also comes with an angled mounting bracket to help you position the camera to get the best view of visitors at your door. Unlike Ring, August doesn't include any tools in the box, which makes more difficult to install, but still the third-easiest smart doorbell to install overall.

August Doorbell Cam Pro can only use its battery as a temporary backup. During our tests, it usually lasted a few hours before shutting down. You use an included USB dock to charge the device's backup battery and test the doorbell before you install it to make sure it works with your Wi-Fi network.

One of the Doorbell Cam Pro's best features is how well it works with August's other products and services. For example, you can connect the doorbell to an August Smart Lock to make it easy to let visitors into your home. It's the only video doorbell we tested that lets you control a companion smart lock without leaving the call, making it more convenient than navigating to another app.

August takes this functionality a little further with its August Access service, which lets you schedule deliveries and repairs though a variety of companies such as Sears, Handy, Pro.com, Shyp and more. When you schedule an appointment through August Access, the worker coming to your home gets a one-time code to enter your home.

The August Doorbell Cam Pro also works with third-party smart home products and services, including Amazon Alexa, Google Assistant, IFTTT, Nest, Logitech Harmony and more. The doorbell has a one-year warranty, which is average for a video doorbell. If you need help with your Doorbell Cam Pro, you can contact August over the phone, email and social media.