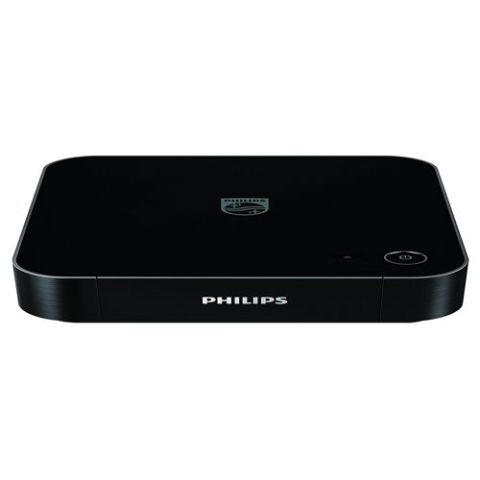 The Philips BDP7501 makes up for its high price with its native 4K support, 3D disc compatibility and Netflix app. However, it lacks the wide app selection of other players.

The Philips BDP7501 is a premium 4K Ultra HD Blu-ray player that supports HDR. The image quality this player provides is absolutely gorgeous.

The player looks similar to an Apple TV. It is a black cube and has a much smaller footprint than other players. However, it weighs almost twice as much – 3.5 pounds. It plays regular and 3D Blu-ray discs, DVDs and CDs. Most other players aren’t compatible with 3D discs. It's also one of the few players that natively plays 4K videos; others upscale the content. This combined with its high dynamic range makes the colors extremely bright and detailed and the blacks deep.

If you have a home theater setup, the Philips BDP7501 would be a wise choice for a Blu-ray and DVD player, since it supports Dolby TrueHD and the latest upward-firing Atmos speakers. What we like most about this player is how future-proof it is. Features like Dolby TrueHD, HDMI 2.0 and HDCP 2.2 on its HDMI ports mean the player will be compatible with the latest and upcoming HDTVs, AV receivers and Blu-ray discs.

During our tests, this player took about 16 seconds to boot. Its menus are easy to navigate and resemble the PlayStation 4 home screen. You can stream 4K Netflix and YouTube videos, since it has built-in Wi-Fi, or music and movies using a wireless DLNA media server or the USB port on the back. There is no app store for downloading other streaming services, so you can’t stream music from services like Pandora or Spotify. Philips includes a remote control with batteries and even an HDMI cable with its player. We thought the remote was comfortable to hold and use in the dark, despite not being backlit. Philips conveniently designed the remote with separate fast-forward/rewind and chapter-skip buttons. It also has dedicated buttons to fire up Netflix and YouTube, which is a nice touch.

The Philips BDP7501 is a pricey but impressive Blu-ray player. It has an intuitive user interface and gorgeous picture quality, and it plays 3D Blu-ray discs. You can stream videos from YouTube and Netflix, but it lacks an app store where you can download even more apps.