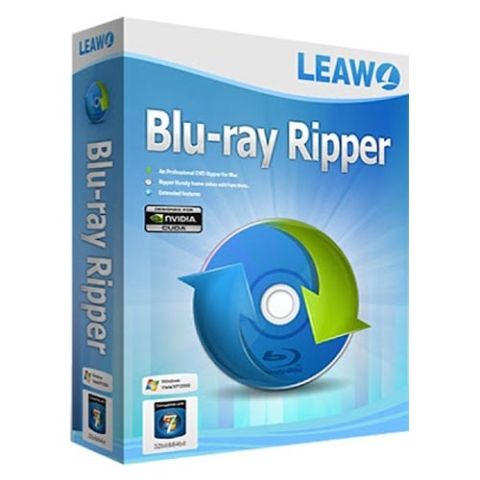 Despite slower conversion speed and lack of burning options, it's the best overall Blu-ray to DVD conversion software.

Editor’s Note: The Digital Millennium Copyright Act (DMCA) forbids circumventing copy encryptions contained on commercial discs. The DMCA makes no exceptions for circumventing these encryptions for personal use. Top Ten Reviews does not endorse piracy or any other illegal activity.

Leawo Blu-ray Ripper has number of great features that make it an excellent choice for Blu-ray to DVD converter software. This is an easy-to-use application that enables users to convert Blu-ray movies not only for DVD, but also for any device you watch video on, such as computers, smartphones, tablets and gaming consoles.

By removing copy protections, this software unlocks the content in your Blu-ray Discs so that you can enjoy them wherever and whenever you want. Moreover it contains basic video editing features that allow you to pick and choose which content you want to rip, convert or burn.

Perhaps most important feature found in Leawo Blu-ray Ripper is its built-in decryption tools, without which it would be impossible to convert the content found on many commercial Blu-ray Discs. Encryption protocols such as AACS and CSS are automatically removed as the software rips the files from the disc, making them available for conversion and burning onto a DVD or other electronic devices.

One of the more unique tools found in this Blu-ray to DVD converter software is the editing suite. This enables you to crop the video frame to remove unwanted edges, adjust output parameters of the converted video such as bit rate and resolution, and fine-tune video effects including brightness, contrast and saturation. In addition, you can add custom watermarks and certain applied artistic effects to your converted DVD.

While certainly not essential on Blu-ray to DVD converter software, we were surprised to find the ripper software does not have any Blu-ray-to-Blu-ray copying capabilities. In other words, you cannot make backup copies of a Blu-ray disc to other blank Blu-ray Discs. However, we liked that the software could convert Blu-ray to a range of other common audio and video formats, including AVI, MP4, MOV and WMV. So unless you are looking to specifically make 1:1 Blu-ray copies, Leawo Blu-ray Ripper is undoubtedly an ideal, all-inclusive resource.

Of all the top-ranked Blu-ray to DVD converter software programs, Leawo Blu-ray Ripper is one of the easiest to use. We liked the clean, sleek user interface of the program and found it intuitive and easy to navigate, having no trouble finding our way around. Apt for beginners and tech-savvy users alike, the software offers advanced functionalities that are surprisingly simple to access and utilize.

We found the conversion process of Leawo Blu-ray Ripper to be easy and seamless. The conversion screen visibly shows how far along the process is through a percentage bar (which details the actual percent of the file that has already been converted), and lists the current elapsed time and current estimated size of the output file. There are also convenient after-done options, including shutting down the computer once conversion is complete or opening the output folder that was selected prior to conversion.

Among the handy features we found on the software are conversion pause, which delays conversion without disrupting or stopping the entire process, and batch conversion. The program also offers automatic updates, and you can specify how often the program checks for new updates.

One area the software failed to impress was its slower conversion speed. The conversion took nearly as long as the actual length of the clip we were converting (the clip was 57 minutes 55 seconds in length and took approximately 46 minutes to convert).

The main interface of this Blu-ray to DVD conversion software details how to convert your Blu-ray Disc into DVD format in four basic steps using the built-in profile with fixed settings. The program also has a splitter function that allows you to trim and merge different sections (e.g. chapters) of the Blu-ray Disc. We were particularly impressed with the software's ample multi-language support and large window that offers real-time preview of the converted files.

You can also modify the output file and your DVD copy using advanced features that can be accessed through the editing suite. If you want to convert the Blu-ray disc into a format other than DVD, you can do so simply by selecting the preferred audio or video format from the profile dropdown menu at the bottom of the interface.

While its slow conversion rate is bothersome, it's worth it for Leawo Blu-ray Ripper's converted video quality, which is right on par with what we'd expect from first-rate converter software. The picture of the converted video was nearly as sharp as the Blu-ray original, with very little quality loss and no perceptible skips or video distortions. Similarly, the audio was crisp, coherent and completely in synch with the picture. We feel putting up with a rather moderate conversion speed is definitely worth such a high-quality converted video.

The biggest disappointment of this Blu-ray to DVD conversion software is that it does not have any burning features that allow you to write your movies onto a new DVD disc. While it does have the capability to convert files to a format where they can be played in a DVD player (.VOB), you will need to install a third-party burning program to complete the process and play your Blu-ray movies in a DVD player.

The Blu-ray to DVD converter software supports all major Windows operating configurations, including Windows 8, 7, 2000, XP and Vista. Additionally, Leawo has recently released a Mac version of the software. It’s one of the few applications we reviewed that has such wide compatibility.

Best DVD rip software 2019: how to rip DVDs to your hard drive with ease

The Best Blu-ray to DVD Converter Software of 2019

The software is unfortunately lacking when it comes to technical support. There are a handful of brief, ineffectual FAQs on the manufacturer's website that are more likely to raise, rather than answer, questions. While the site also has tutorials on various Leawo software products, it astonishingly does not have one for its Blu-ray ripper software. The website also has a blog, but it provides little more than brief announcements regarding new product updates or versions.

If you're looking for information specific to the Leawo Blu-ray Ripper program, your best bet is to peruse the website's user forum under the Blu-Ray Ripper category. There is also an online contact form that can be used to submit a ticket if you're having specific installation or technical issues with the software.

Leawo Blu-ray Ripper is the best all-in-one source for Blu-ray ripping into various formats. We definitely feel the predominant advantages the software offers far exceed its apparent downfalls of moderate conversion speed and deficient technical support. No software is entirely perfect, but with superior features and high-quality video output, Leawo Blu-ray Ripper comes close and is without question the clear choice to convert Blu-ray to DVD and other HD and common video formats.