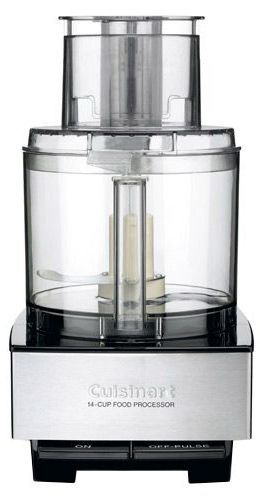 This food processor combines power with quality parts to easily cut, puree or mix a wide range of ingredients.

The Cuisinart Custom 14 (DFP-14BCN) is a powerful 14-cup food processor that achieves near-perfect results for a wide range of food. Its simple design and adjustable blades allow you to achieve varying levels of thickness or fineness when processing food. Although the device doesn’t have advanced features like variable speeds or touch panel controls, it outperforms many other appliances thanks to its simple and durable design. The single S-blade works for chopping food like fruit, cheese and dressings, and works with incredible uniformity.

This is one of the best food processors in terms of simple performance, due to its versatility and consistent results. The single blade, cutting disk and dough kneader proved fully capable of achieving near-perfect uniformities in our testing. The slicing blade is adjustable, so you can get varying thicknesses on processed food. For example, this functionality allowed us to achieve both paper-thin and thick slices of potatoes and mushrooms alike. The only issues we found with uniformity were that the occasional slice of mushroom or potato was slightly thinner than the rest of the processed results.

Although it takes more pulses to fully grate parmesan than with some other models we tested, the processor yields near-perfect results without leaving large chunks of food behind or mashing processed food at the bottom of the bowl. In some cases, a large chunk of food can get wedged between the blade and lid, though these occurrences were rare in our experience. When kneading pie dough in our tests, this model perfectly integrated all of the ingredients together without leaving any wet spots or unincorporated elements. It performed most ideally when a recipe called for more than 3.5 cups of flour, and although it doesn’t have a speed setting specifically for dough, the included kneading blade is a helpful accessory and can save you the added cost of purchasing another appliance for kneading.

In addition to kneading, this food processor is also designed to puree foods like a blender. It performed admirably when we tested it for making salad dressing with cauliflower, though it ultimately depends on what types of food you wish to liquefy. It won’t crush ice for smoothies or achieve smooth liquid textures with the same efficiency as a blender, but it works quite well for textured purees like salsas, dressings and pasta sauces.

In cleaning this top-rated food processor, we found it took a little more than 12 minutes to fully prepare it for future uses. The appliance contains a lot of individual parts, such as the rubber seal along the top of the bowl, but the design allows you to reach every crevice of the device as you clean. After cleaning, it may take some practice to remember how everything comes together. However, because you can take apart all of the individual elements to remove food particles from the device as a whole, you can be sure there aren't any hidden pieces of food when you're done.

Be aware that the lid of the food processor locks in place by means of a button rather than a twist seal. In some instances, the lid seal can prove imperfect and allow food chunks to escape from the bowl. In our experience with the food processor, it was easy to avoid by making sure to hold the lid down firmly while pushing the lock button. Even though the lid locking functionality requires some practice to master, this does nothing to diminish the processor’s overall ease of use.

The bowl’s capacity is advertised as 14 cups, but this depends more on the type of food being processed. For cheeses, it utilizes the full bowl, but it can only handle up to 3 pounds of bread dough or 3 cups of chopped or pureed vegetables. Processed meat is a bit more difficult to chop in bulk, so the bowl load shouldn’t exceed 2 pounds, whereas with cake batters you can use more of the bowl, up to 4 pounds.

The single speed setting – pulse – makes this appliance simple to use. This way you can achieve the most desirable results or the most ideal uniformity without worrying about differing speeds yielding drastically different end products. The unit itself is rather heavy, but this makes it stable when processing loads that use the entire bowl. The blades sit quite close to the bottom of the bowl, which adds to its processing efficiency, particularly when incorporating dough or sauce ingredients.

The Cuisinart Custom 14 comes with an incredibly large feeding chute – one of the largest of all the appliances we tested. In some cases, it can accommodate a full potato. In our testing, the feeding tube worked well with large quantities of food or items large in size. The pusher assembly consists of two parts, with a small and removable clear pusher and a central feed tube, which means you can continuously feed ingredients while processing.

This food processor’s manufacturer, Cuisinart, offers warranties on the individual pieces as well as the motor itself. The motor is protected by a five-year warranty. While this is not as long as several other products we reviewed, it is still a sufficient in duration to allow for product flaws to be discovered and addressed. The entire unit is also covered by a three-year warranty, which covers all individual parts such as the bowl, blades and wiring.

Throughout our tests of processing foods of varying toughness, we found the Cuisinart Custom 14 to be the best food processor from a performance standpoint. It consistently produced highly-uniform results, whether it was shredded cheese or diced potatoes. A common issue among many other appliances is a final large chunk of food that the processor just can’t seem to reduce. This device rarely had the same issue due to the design of the cutting bowl, blade and disks. Its performance, combined with a simple design and ease of cleaning, makes this one of the most ideal machines for processing foods.