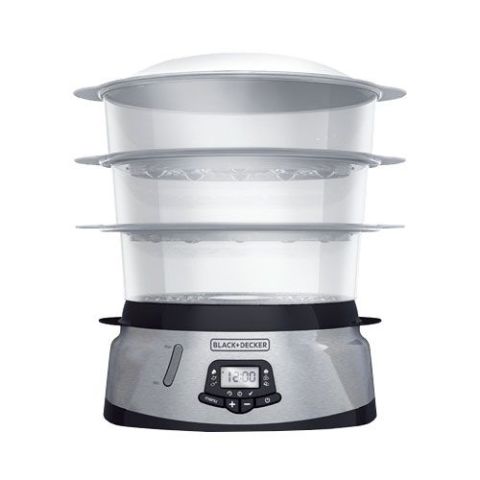 The Black+Decker 3-Tier Digital Programmable Steamer is an easy-to-use appliance that includes a unique feature to help infuse your food with flavor. Although it didn't perform as well as our highest-rated steamers, it cooked chicken and rice well.

Editor’s Note: This product has been removed from our side-by-side comparison because it is not yet available. You can still read our original review below.

All food steamers should effectively cook everything from fish and vegetables to chicken and rice, and the Black+Decker 3-Tier Digital Programmable Steamer did just that – and more. The healthy alternative to frying and other cooking methods isn't often considered a tasty alternative, but Black+Decker tried to change that by adding a small screen for aromatics, like herbs and garlic, to turn up the flavor of your food. The Black+Decker 3-Tier Digital Programmable Steamer earns our Top Ten Reviews Bronze Award.

After cooking 6 ounces of fish with dill and lemon for the time suggested in the user manual, our taste-testers found that it was flavorful and mostly moist, but the texture was a bit tough. The marinated chicken we steamed was a bit more impressive. Overall, chicken wasn't as successful in steamers as other foods, but in this Black+Decker food steamer, the chicken breasts were moist and tasty. However, they did take longer to cook.

Our testers found that the potatoes we cooked in this steamer were not as tender as others we tasted from the competition, and they were lacking moisture. Rice, however, was much better. It wasn't soggy or crunchy; it was just right. As a vegetable steamer or a rice cooker, this steamer doesn't quite excel, but it does its job well enough. In the testing process, we noticed a small leak at the bottom of the base, but it wasn't severe enough to deplete the reservoir.

As with most food steamers, this was an easy unit to use. After adding water and plugging in the appliance, all we had to do was add food and aromatics, and then tap through the menu to find the right food on the digital display. One issue with the display we found was that it was nearly impossible to read after a few minutes of steaming because it would fog up the window. This unit has three tiers, so you can cook a full meal at once – rice in the bowl at the bottom, meat on the center tier and vegetables at the top. One of the Black+Decker 3-Tier Digital Programmable Steamer's programmable features, the delayed start, makes it easy to set up vegetables or rice to cook when you want them to.

We washed each tier by hand and found that this steamer was easier to clean than even our top-ranked steamers. It took us 7 minutes to clean it thoroughly, and the holes were easy to clear of any trapped food. If you prefer to use your dishwasher, all of the pieces – the base excluded – are cleared for that. When you're ready to put everything away, the trays nest within each other, so you can get this unit very compact and fit it in a small cabinet.

This is one of two steamers in our lineup that includes a two-year warranty, which means for two years after purchasing this appliance, you can get a defective unit replaced or repaired for free. The manufacturer also offers customer support through an online form and phone, and you can find the user manual on the appliance maker's website.

Although the Black+Decker 3-Tier Digital Programmable Steamer does not match the excellence of our top-rated steamers, it comes very close. The small issues we found with this unit did not interfere with the quality of the food we steamed.