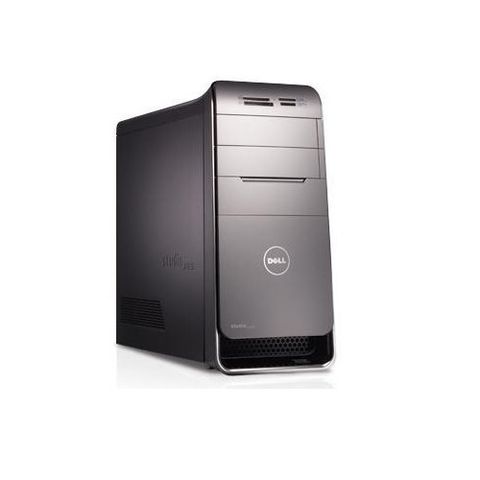 When you consider the massive storage space, Blu-ray player, 2.5 GHz processing speed and 8GB of RAM, you can see that this computer will handle any home project you need it to.

If you're looking for a home computer that goes beyond your expectations, we strongly consider you take a look at the Dell Studio XPS 7100. This desktop computer gives you a winning combination of storage, processor speed and connectivity. With storage space of nearly 1.5TB and a processing speed of 2.5 GHz, you will be covered whether you want to surf the web at breakneck speeds or organize thousands of family photos. There are plenty of reasons this computer trounces the competition, but the most important could be that you won't outgrow this machine anytime soon.

Dell is a trusted name when it comes to computers, and for good reason. They offer a wide variety of customization options so you can get the exact computer you need for the price you're willing to spend. The Dell Studio XPS 7100 is also exceptionally customizable. With a Dell, you know you'll get a quality product for your money. And there is always the option to update the hardware later as needed.

There are several factors to look into when you are trying to find the right home computer, but performance is among the most important. In measuring a system's performance we consider memory, hard drive size, processor speed and video card quality. A desktop computer that is adept in these areas will run smoothly whether you are writing a paper, surfing the web or organizing all of the photos from your last vacation.

The first thing we look at is RAM. The 8GB of RAM in the Dell Studio XPS 7100 is high compared to other home computers. RAM acts as the middle-man between the application and the hard drive. It's a temporary storage location that's in use when you run any software application while the CPU is processing. If you don't have enough space in your RAM the computer becomes sluggish and can even freeze. Video games and multimedia applications take up a lot of memory, so it is important to have several gigabytes available.

One of the specs we were most impressed with is the hard drive. This is where all of your files are stored. The more storage you have, the more you can keep on your computer without relying on an external hard drive. The Dell Studio XPS 7100 has a storage capacity of 1500GB (1.46TB). You won't be running out of storage anytime soon even with hundreds of vacation photos and videos.

When it comes to a processor, it can be really hard to determine if what is installed is actually good. The processor has its own storage and speed. And the AMD Phenom II X6 1055T comes with a speed of 2.8 GHz and a cache of up to 6MB. This isn't the best one we've seen, but for normal everyday use this should be plenty. The video card included with the Dell Studio XPS 7100 is the AMD Radeon HD 6670. This is once again good enough for day to day use and gives you plenty of speed for viewing high-res photos and playing most online games.

Once you know that the Dell Studio 7100 has the power you need, then you see what other features are available. We looked at the operating system that comes with the home computer. We were pleased to see that it comes with Windows 7 Home Premium. We like how user-friendly this OS is, though it doesn't offer as much in the way of customization as other operating systems can. This is a good system for those who want something that will work with the majority of the applications on the market and isn't too difficult to learn.

There are several connectivity options. This home computer can hook up to the internet via Ethernet, it doesn't come with wireless already built in. If you want wireless functionality that costs extra, but it is available. However, we were pleased that it comes with a memory card reader built into the tower itself. Instead of taking up a valuable USB port, you can just plug your SD cards straight into the computer. There are a total of eight USB ports available.

One of the big advantages the Dell Studio XPS 7100 has over the competition is the optical drive it comes with. In our comparison, this is one of only two home computers that come with a Blu-ray disc drive. With Blu-ray discs outpacing DVDs in quality and storage, it is no wonder the best computers now come with optical drives that read Blu-rays.

The physical design of the computer can play an important role that you may not think about with your initial examination. If you don't have much space or have to move the computer around, you don't want anything that is too big or too heavy. The Dell Studio XPS 7100 isn't overly large or heavy. We were pleased the tower is only 17.9 x 16.02 x 7.31 inches and weighs only 22.4 pounds.

One of the aspects we really liked about the Dell Studio XPS 7100 is the support offered by the manufacturer. Granted, Dell is a large corporation so sometimes it can be difficult to know exactly who to ask for help if you need it, but we were pleased that they don't charge anything for their services. They have phone support so you can call or even do a live chat with one of their technicians. We were also pleased with their email options and the user forums. This way you are sure to get the answers you need for any questions that might come up when you use your desktop computer. Dell offers a limited warranty for this product. This warranty is for a year and is called their in-home service.

When looking for a home computer there are plenty of factors to look into. With the Dell Studio XPS 7100 you get a large storage capacity of 1500GB, a processor with a speed of 2.8 GHz and a Blu-ray player. You are sure to get everything you need to accomplish anything, whether you are surfing the web or touching up the photos from your cousin's wedding. You won't have to worry about spending the money to upgrade the computer any time soon.