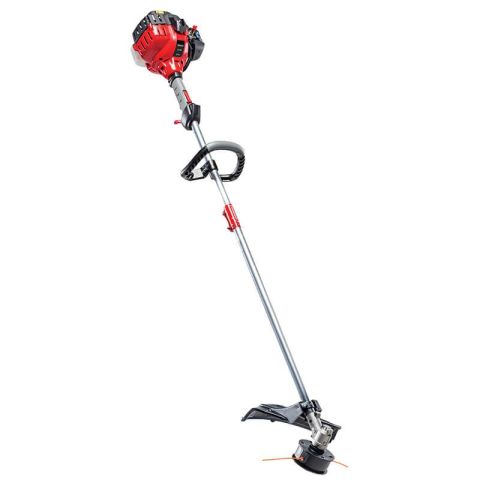 The Snapper S29SS Straight Shaft Gas Trimmer is a versatile lawn tool. You can use it with attachments from other manufacturers to perform all kinds of tasks around the yard.

The Snapper S29SS’s biggest advantage is its 29cc four-cycle engine, which makes it one of the most powerful weed whackers we reviewed. The higher an engine’s cubic centimeter (cc) rating, the more power the trimmer is, and the average for the trimmers we reviewed is 25cc. This weed trimmer has enough power to blast through the weeds plaguing your lawn or garden. However, it weighs 18 pounds, so it is the heaviest trimmer we considered. If you want a lighter trimmer, look at the Weed Eater W25SFK – it’s one of the lightest gas trimmers we reviewed as well as one of the easiest to assemble.

The trimmer head’s healthy 17-inch cutting radius covers a lot of ground in a short time, plus it has a shield to protect you from flying debris. In addition, this Snapper trimmer has many other nice features that make it easier to start and use than other models. For example, it has an adjustable handle and a trigger control that makes it easy to turn the device on and off. Also, the two-step start process is simple – you just prime the machine and pull the spring-assisted cord. If you are near an outlet, you can bypass the pull cord altogether and start the machine with the electric start button.

The four-cycle engine has separate fill ports for oil and gas, so you don’t have to go through the hassle of mixing them beforehand. This weed whacker also comes with a padded shoulder strap to prevent fatigue from carrying it around the yard – a nice addition since the machine lacks anti-vibration technology. This trimmer emits about average noise compared to the other weed whackers we review.

Snapper doesn’t make its own attachments, but its products are compatible with third-party accessories like brush blades, pole saws, edgers, hedge trimmers, blowers and cultivators. As such, the Snapper S29SS can be an all-purpose yard tool. Some other manufacturers discourage using universal attachments with their weed eaters, and a few even void their warranties if you do. However, Snapper doesn’t have these stipulations.

Snapper includes a three-year warranty on the weed whacker and drive shaft. If you run into problems, you can contact the manufacturer via email or phone or visit an authorized service center, which you can find on Snapper's website.

Top Ten Reviews has reviewed the Best Weed Whackers of 2019 so that we're able to offer you the authoritative buying advice you expect.