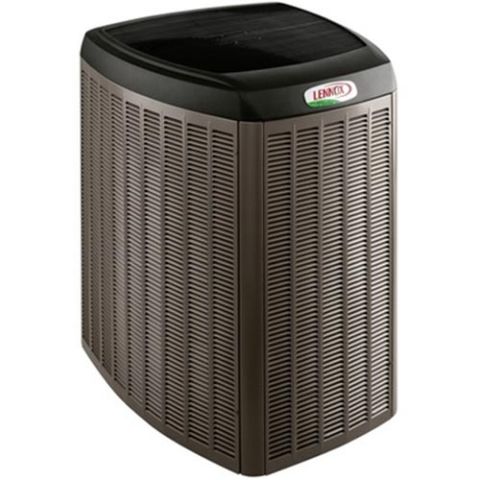 One of the reasons Lennox units are so efficient is their compressors run at several speeds. Older air conditioners have one-stage compressors, so they’re either fully on or fully off. Other modern units have two-stage compressors, which have two intensity levels that use different amounts of energy. However, Lennox air conditioners have more than two stages – they adjust in tiny output increments, as small as 1 percent, so they use the minimum amount of energy necessary to maintain a comfortable temperature in your home.

Some Lennox air conditioners can save you both money and energy when you use them with the iComfort Wi-Fi Touchscreen Thermostat. This thermostat lets you turn on the AC from your smartphone when you head home from work so everything is nice and cool when you arrive. You can also turn the unit off from your smartphone so you don’t waste energy cooling an empty house if you forget to turn the AC off when you leave.

Lennox’s air conditioners produce as little as 59 decibels of sound as they run. That is about the noise level of a normal conversation and much quieter than older units. However, some less-expensive Lennox models are as loud as 76 decibels, which brings the brand’s average noise level to around 72.8 decibels and makes it the second-loudest one we reviewed.

These central AC units are built from galvanized steel and feature a zinc-coated steel base, so they can withstand the elements. One of their design highlights is the SmartHinge louver feature, which makes it easy to access the units’ inner workings from every side. This makes maintenance less of a chore.

These systems come with a 10-year limited warranty, which covers the compressor and other components. That's a respectable warranty compared to those included with other central air conditioning units, although some other manufacturers, such as Amana, offer lifetime warranties. Lennox’s warranty is conditional, which means you need to register your unit within 60 days of installation to get full coverage; otherwise, the parts and compressor warranty drops to five years. The conditional warranty doesn't apply to models in the Dave Lennox Signature Collection, which is the only product line we looked at that doesn't have a conditional warranty.

Lennox's high-quality central air conditioners are great choices for keeping your home comfortable. Their SEER ratings are generally high, but that means they cost more. The units are constructed of quality materials, and the systems are backed by a good warranty. Lennox’s extras and smartphone compatibility make its central AC units stand out from the pack.