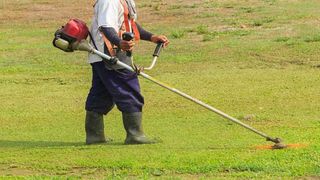 The automatic advancing mechanism works by sending out more line when the string gets too short. If you have an automatic feed electric string trimmer, the last thing you're going to want to do is tap the head on the sidewalk because it will break it   and negate your warranty.

Advantages of Automatic Feed
Instead of focusing on the length of the string, you can pay attention to where the grass ends and the prize daffodils begin. Since you don't have to pause to tap the head on the ground, you can finish trimming faster because it advances on its own. Automatic feed string trimmers are more prevalent in stores than bump feed trimmers, so shopping for one will be a breeze as well.

Problems with Automatic Feed
As with any machine with moving pieces, the motor is bound to break or malfunction at some point. If the motor still works but it doesn't feed the string properly, you may spend a lot of time trying to fix the line feed jam. Fixing the motor on the automatic feed may be more difficult and expensive than it would be to replace the whole unit.

Advantages of Bump Feed
When you have a bump feed string trimmer, you manually advance the string by gently bumping it on the ground. This gives you control over how much line you use. The bump feed is also a more simplified system for advancing string, so if it stops working, it's more likely you can make repairs quickly and easily. Keep in mind that most electric string trimmers also come with a warranty.

Problems with Bump Feed
If you push down on the head of your trimmer too hard, it can crack the spool or damage the spring. Even if you're gentle with your string trimmer, over time the spring in the head will wear out and you'll need to replace it.

Best mattress online 2020: best in a box and delivered mattresses

Best dryers 2020: Energy-efficient electric dryers for all capacities and budgets

Pre-Wound Spools vs. Winding Your Own Spools

Many feed problems originate with imperfections in the way the line is wound on the spool. If the line isn't just right, the feed can jam. You can purchase pre-wound spools from the manufacturer or a generic distributor. Pre-wound spools can be expensive since you're paying for the line, the new spool, and for manufacturer to wind on the string. If you don't want to mess with feed problems, you may feel that spending the extra money for the pre-wound spools is worth it. On the other hand, if you're looking to save money, you may want to re-wind your own spools. Usually, the owner manual for your electric string trimmer has instructions on how to re-wind you electric string trimmer's spool. As long as you carefully wind the spool, it shouldn't have trouble advancing. You can usually purchase large amounts of line for much cheaper than you can a pre-wound spool. The tradeoff is that you have to wind the string yourself.