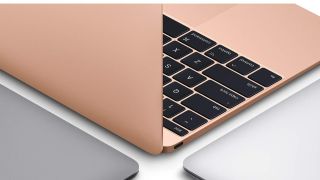 We’ve just spotted a pretty ace deal for you. Apple has slashed exactly 299 dollars and a cent off its 256GB m3 Rose Gold MacBook model – if you get it on Amazon. If you find the model enticing but want to wait until Amazon Prime Day, there are no guarantees that this offer will still be available then, so it’s better to act quickly. Originally going for $1299, it's now on offer for $999.99, which equals 23% off.

The deal makes it cheaper than the lowest-spec MacBook Air (2018). That Air model has a faster i5 processor than this MacBook’s Intel Core m3 processor, but this MacBook has it beat in terms of storage with a 256GB SSD.

If you need a professional-level laptop without the need for the faster processor (which you admittedly would if you’re a designer, photo editor or work with a lot of video), this deal is worth taking a good, hard look at.

This MacBook has a 12” screen and got an impressive 4.5 stars out of 5 by our friends at TechRadar, so it comes with expert approval.

The deal is exclusive to the Rose Gold model of the laptop, and doesn’t apply to the Silver or Space Grey models, but in our opinion that’s no bad thing as the Rose Gold is both classy and striking, although staying incognito at the local café will be hard with this eye-catching laptop. Then again, if you want to stand out, that won’t be a problem here!

Save $299 on the 256GB m3 Apple MacBook at Amazon
Save 23% – Get the Rose Gold 256GB Intel Core m3 Apple MacBook for $999.99, down from $1299, on Amazon now. It's got an updated processor from the previous model, an improved keyboard and trackpad, and is comfortably slim, not to mention eye-catching in the Rose Gold color. Deal ends: UnknownView Deal