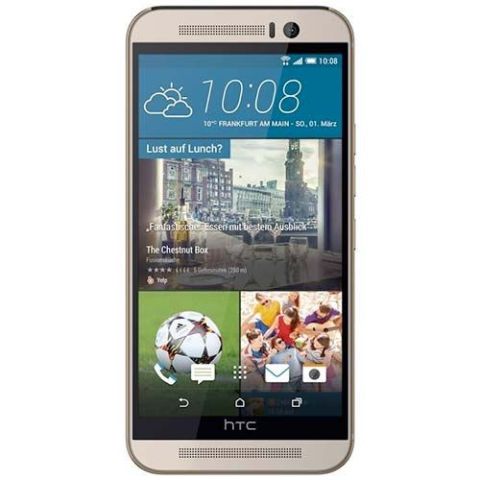 Pristine, powerful and maybe a little boring, the HTC One M9 is what happens when you leave a fantastic smartphone in stasis for a year.

Two years ago, HTC legitimized its position in the flagship phone market with the release of the HTC One. Better known today as the One M7, the smartphone stormed onto the scene with a gorgeous screen, solid internal specs and the best craftsmanship ever seen in an Android device. The lone complaint you could levy against the M7 was that its camera was subpar. Last year's One M8 boasted improved internal components, an even better screen, a perfected design and the same disappointing camera.

This year’s new HTC One M9 is a gorgeous phone, featuring a near-identical design to last year's M8 and equally superb build quality. Its internal components received a big boost, and right now it's arguably the best-specced phone you can buy. Its screen remains beautiful, its operating system is streamlined and the camera has finally been upgraded. Still, there's nothing revolutionary or terribly exciting here, and even with its improvements, the camera still falls flat. The HTC One M9 is a great phone. It's almost superb, but it's not quite there.

We could gripe about the HTC One M9's similarity to last year's M8, but it's still one of the nicest Android phones we've ever held. Its brushed aluminum chassis is perfectly smooth, its edges defined without being sharp or uncomfortable in your hands. Our gunmetal gray version offered a sleek, understated minimalism that was eye-catching without being overwhelming.

The M9 features the same 5-inch, 441PPI HD display as the M8, with the same oleophobic coating giving it a silky feel on your fingertips. The screen offers crisp, color-accurate access to an appreciably clean version of Android 5.0.2. HTC has always had a light touch with its operating system flavors, and while HTC Sense isn't stock Android, it's a close second in terms of usability.

Physically, the One M9 is ever so slightly bigger than the One M8, clocking in at 5.54 ounces and almost 6 inches tall. It's weighty in your hand, but not uncomfortably so; rather, the phone feels solid and durable. Given the amount of aluminum in its construction, that's no surprise.

The HTC One M9's camera, despite improvements, still can't hold a candle to the latest shooters from Apple and Samsung. The problem is not in the numbers; the M9's 20-megapixel sensor and ability to shoot 4K video put it squarely in the realm of top flagships. Even the Samsung Galaxy S6 has only a 16-megapixel sensor.

As Apple proved long ago, while you need enough megapixels to capture detail in your photos, the software supporting all that hardware is most important. In the One M9, HTC is selling a camera that performs beautifully in bright light but poorly everywhere else. Color saturation issues, white balance problems, artifacting and detail loss all plague the lens in suboptimal conditions.

True, the One M9's camera is an improvement over HTC's past iterations, but not by much. You shouldn't let it stop you from considering an otherwise excellent phone, but it's a definite detraction that we sincerely wish HTC had fixed generations back. LG, Samsung and Apple all manage to create smartphone cameras that are consistently solid; it's high time HTC joined that group.

The One M9's internal components are shoot-for-the-moon impressive. Two quad-core CPUs, a 1.5GHz chip and a 2GHz chip work in tandem to effectively serve as a 64-bit, octa-core brain for the smartphone. 3GB of RAM help drive its creamy-smooth interface. As far as storage is concerned, HTC has only released a 32GB model, but you can add in another 128GB using the microSD expansion slot.

To be honest, that expansion slot is what kicks the HTC One M9 over the edge. We run dozens of benchmark tests on every phone we review, and the One M9 scored just barely lower than Samsung's Galaxy S6 – no surprise, given that the S6 has a slight edge in computing power. While Samsung's latest has the speed lead, it doesn't have an SD slot, which offers a flexibility that's long defined great Android flagships. We'd happily take the slight speed decrease of the M9 in exchange for that expansion slot.

Unfortunately, battery life on the One M9 is merely adequate. It gets you through a full day of use without concern, but you need to plug in every night or risk being nervous about your charge the following day. In the web browser battery test run by our sister site Tom's Guide, the One M9 managed 7 hours 14 minutes. That's less time than the iPhone 6, over an hour shorter than the Galaxy S6 and several hours shy of phablets like the Galaxy Note 4. Add to this the lack of replaceable battery or wireless charging, and the result can't compete with any other top smartphone.

There's one bright spot to the One M9's battery: Quick Charge 2.0. Quick Charge is a firmware feature that lets you rapidly charge your battery from empty to 60 percent in about 30 minutes. After that, the process slows to a more typical pace so as not to damage the battery, but the results can be day-saving. Hopping into the shower after work but before a night on the town? Plug in your phone beforehand, grab it as you leave and you are good to go.

Befitting a flagship, HTC's latest has all the advanced features you'd expect, including Bluetooth 4.1, aptX support for audiophiles, an infrared blaster so you can control your TV, an FM radio for listening to tunes even when you don't have an LTE connection, and so on. What stands out the most is the device's IPX3 water resistance certification, which essentially means the phone is splash and dust-proof. You still can't dunk it under water or take it into the shower, but you needn't worry about rain or trips to the beach.

There's something crisp about the One M9. It's large, but not uncomfortably so, and functional, but not without elegance. Android Lollipop runs as slickly as we've ever seen. Colors burst from the screen without being oversaturated. Even the subtle click you feel when you wake the phone or tap on its keyboard is far superior to the incessant buzz of most devices.

There's a lot to love here, but there was a lot to love in the One M8. The M9 isn't a revolution of features or design; it merely evolves on what came before, trying and failing to fix a camera that was universally panned. It's not about to be the best smartphone on the market, but it's still a very solid attempt.