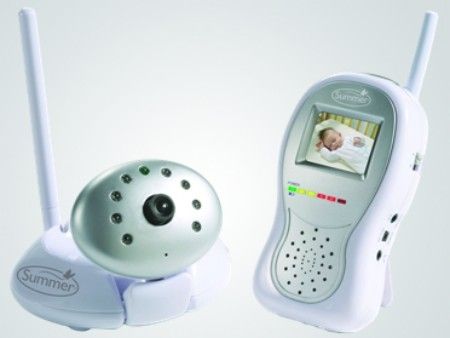 This is the top monitor for budget-conscious parents who don't live in densely-populated areas.

There's no question that the Summer Infant Day&Night Handheld Color Video Monitor is the dark horse candidate among our top-ranked video monitors. We were surprised to find the analog video baby monitor - at a fraction of the cost - easily outperforms much of the digital competition.

This monitor sports many of the same features you'd find on higher-priced video baby monitors including a range of sound-activated lights, pan and zoom capabilities and an A/V output so the receiver can be connected to another viewing device, like a TV or video recorder. Another great (and unexpected) feature for such a low-cost monitor is that it supports up to three cameras, making it a robust, affordable monitoring system for families with multiple children.

A video on/off button enables audio-only mode at any given time and a power-saving feature allows the receiver unit to time out after three minutes of inactivity. While we like the latter feature in theory, it would be best used in conjunction with VOX mode but the Summer video baby monitors do not have any voice-activated capabilities; we don't see the point of using the feature if you have to manually turn the screen back on to resume viewing, especially during the middle of the night.

The biggest drawback with these Summer video baby monitors is obviously the potential for interference. It runs on an analog 900MHz frequency and it's equipped with just two channels. Consequently, it can transmit an unsecure signal and your audio or video feed could potentially be picked up outside your home, especially if you live in heavily-populated urban areas (think apartment buildings or dense neighborhoods). However, it seems such interference is most likely to occur if a close neighbor is using the exact same monitor.

A few things we liked about the video baby monitor's design is its build, which is far more aesthetic and fresh than the company's BestView video baby monitors and the fact that it is available in either pink or silver (it's the only monitor we reviewed exclusively tailored for a girl). One thing we definitely would have liked is a larger screen; 1.8 inches seems downright puny compared to the bigger screens found on our other top-rated video monitors. There is a deluxe version of this monitor available with the only difference of a 2.5-inch screen instead of 1.8 inches. But at nearly twice the cost, such a steep price hike seems hardly justifiable for nothing more than a larger screen.

Other notable design features include a headphone jack on the receiver unit, versatile camera swivel and wall-mount capability with all hardware included. Speaking of wall-mount, we're big fans of the security clips that come with the monitor; they can be attached to the wall and are designed to securely hold the adapter cord out of reach when the camera is plugged in.

On the contrary, we were disappointed that the battery life - touted as up to ten hours - doesn't last nearly that long. We imagine such a number can be achieved if you are constantly using just audio-only mode but that would defeat the entire purpose of having a baby video monitor in the first place.

Overall, Summer video baby monitors have decent sound quality. The camera has an extremely sensitive microphone, which was evidenced when the monitor picked up on the faintest of sounds. What we didn't like was the intermittent static pops; often the volume has to be kept on low to avoid hearing the static so you aren't likely to hear any small sounds anyways. We also noticed that the units had to be placed more than 20 feet apart to avoid annoying feedback from occurring.

Like all Summer video baby monitors, this one also comes with a one-year warranty that covers any products defects - not normal wear and tear. Installation assistance, product questions and all troubleshooting are performed via email or a toll-free telephone number, provided on the company's website.

Even though it is one of the more inexpensive video baby monitors on the market, the Summer Infant Day&Night Handheld Color Video Monitor surpassed much of the competition and exceeded even our expectations for an analog monitor. Possible interference issues notwithstanding, the video baby monitor's high video clarity and appealingly low price make it an ideal choice for suburban families living in stand-alone homes.