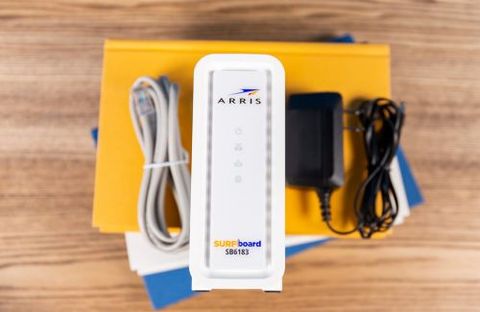 The SB6183 is a simple but effective cable modem.

The Arris SB6183 is a small, simple cable modem capable of keeping you and your devices connected to the internet at fast speeds. It’s a DOCSIS 3.0 cable modem with 16 x 4 channels for max speeds up to 686 Mbps downstream and 131 Mbps upstream. That translates to plenty of bandwidth for streaming, gaming and more on multiple devices. We tested cable modems on Comcast Xfinity’s 400 Mbps internet package, the fastest plan available in our area. We integrated the SB6183 into our network and connected five devices: one laptop monitoring the network, one laptop streaming Netflix in 4K and an Xbox One, PlayStation4 and gaming PC all downloading large game files.

All the modems we tested are rated for throughput above the 400 Mbps connection we tested with, and all easily passed our test. Any of these modems work for most households, but if you subscribe to an internet plan that advertises speeds of 300 Mbps or higher, consider one of the 24 x 8 channel modems like the Motorola MB7621 instead. More channels don’t hurt your network, and it leaves room for upgrades later.

Because the products we tested performed identically in our tests, the main differentiating factors affecting product ranking are oriented toward value and ease of use. On the value front, the SB8163 does well, as its price is lower than the cost to rent a modem from your ISP for a year. It adds value on top of that with its two-year warranty, which ensures your device works long enough to save you over $100 compared to renting.

For ease of use, the SB8163 fares a little worse in comparison, as other products had small features and accessories that make the setup and troubleshooting processes a little more streamlined. Still, the SB8163 is simple to set up, with three obvious ports on the back panel for power, coaxial connection and Ethernet. One minor complaint about the port setup is that the coax and power connections are very close together, close enough to make it noticeably inconvenient to access either with the other present. We mention this because the SB8163 doesn’t have a power button, and the only way to turn the modem off and on again is by unplugging it and plugging it back in.

Another odd design quirk is that the front display houses only four icons. All other products we tested have five, one each for power, uplink, downlink, internet connection and LAN. The SB8163 is missing the last of these, but it does have a status light on the ethernet output port on the back. It serves the same purpose but is much less convenient for at-a-glance troubleshooting. Oddly, our favorite feature on the SB8163 also has to do with its indicator LEDs, as the uplink and downlink icons glow green or blue, depending on the quality of the connection.

Though the Arris SB8163 is a solid cable modem that saves you money compared to renting from an ISP, other products we tested are easier to use and can handle higher speeds. It’s still a good option, with its color-coded status lights and two-year warranty, but another modem might serve you better.