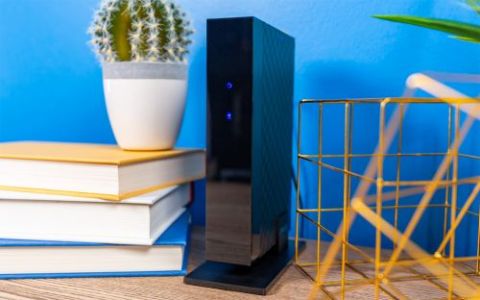 The CM-16 is a good-looking modem for internet speeds up to 300 Mbps.

Of the products we tested, the Asus CM-16 is probably the nicest-looking cable modem. Its compact body stands upright with a sleek front and subtly patterned side panels. We tested it alongside nine other cable modems to make sure it could handle all your streaming, browsing, downloading and gaming needs.

Hooked up to our network on Comcast Xfinity’s 400 Mbps speed package, the fastest internet speeds available in our area, the Asus modem easily kept up with a custom gaming PC downloading a large game file, an Xbox One downloading another large game file, a Sony PlayStation 4 also downloading a large game file, a laptop streaming Netflix in 4K resolution and another laptop being used to monitor the network. With 16 downstream channels and four upstream channels, the CM-16 can achieve speeds up to 686 Mbps, which is above our lab’s ability to test. Even so, modems rarely work at their maximum speeds and 16 x 4 modems work best with internet connections advertising speeds around 300 Mbps. For higher speeds, 24 x 8 modems like the Motorola MB7621 are better equipped to make sure you get the bandwidth you need.

All the modems we tested support speeds well over our 400 Mbps connection, and all performed similarly in our lab. This is great because any of the modems we tested work well, even with multiple simultaneous bandwidth-heavy applications going on. Because the products all tested so similarly, elements like ease of use and price factored heavily into our rankings. Price-wise, the ASUS CM-16 is a good value. Renting a Comcast gateway can cost you about $132 per year. At under $80, the CM-16 costs much less and comes with a two-year manufacturer warranty, during which you can save up to $180 compared to renting from your ISP.

The CM-16 hit a few road blocks during ease-of-use testing. Our testers were taken aback by the CM-16’s online user interface. It was simple to find and access, but it’s severely dated. It looks and navigates like something built in the 90s. It works, but it’s not as intuitive as most of the others we encountered. The device itself does not have a power button, a small feature that most modems omit but is extremely useful should the modem ever stop working. In our research, we also found that the CM-16 appears on only four of the six modem compatibility lists we tested, though it does work for Comcast Xfinity, Cox and Spectrum.

Overall, the Asus CM-16 cable modem is a nice-looking, money-saving option to replace your rented modem. It can handle multiple devices at fast speeds and is simple to set up, even though its user interface looks and feels a bit dated.