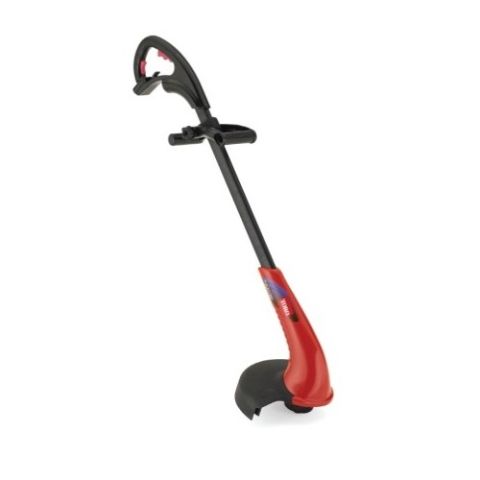 Although it's not as powerful as some other trimmers, its ample speed may make up for it.

In addition to having the highest amount of RPMs, the Toro trimmer is also the lightest electric weed whacker we reviewed. This 4.75-pound trimmer will make less work out of trimming a large yard. Plus, it has a 13-inch cutting swath. To advance the standard 0.065-inch string, you tap the head gently on the ground. The Toro trimmer has a single line that rotates to cut grass and weeds.

The Toro trimmer has a cord-retention hook that allows you to wind the extension cord around it to reduce the chances of disconnecting the trimmer from the power cord. Another convenient feature is the spool of feed line that comes with the electric weed eater.

Despite appearances, this electric string trimmer only has one button – it's just in two places in the handle. The button turns on the electric weed trimmer. We think it's redundant to have two locations on the handle that have the same button, especially when the head of the trimmer is stationary, meaning you aren't using the trimmer at more than one angle.

The string advancing properly seems to be the biggest problem with this trimmer. You can decrease the chances of this if you wind the spool as directed, avoid wearing down the eyelet and trim tall grass from the top to the bottom. Another important thing to remember with your trimmer is to clean it before you put it away to keep it working at its best. The operating manual gives clear instructions on how to assemble, use, clean and store the Toro trimmer.

The Toro electric trimmer comes with a two-year warranty that covers workmanship and material defects. If you have questions or need assistance, you can contact Toro via telephone and email. You can find the manual online, as along with FAQs.

The Toro electric trimmer has one of the fastest operating speeds and it weighs less than 5 pounds. However, it doesn't have a lot of power, the length of the shaft is fixed and it has two buttons in the handle that perform the same function. Even though it lacks some features and has a lower power output, this electric string trimmer will still do a great job cutting weeds and grass.