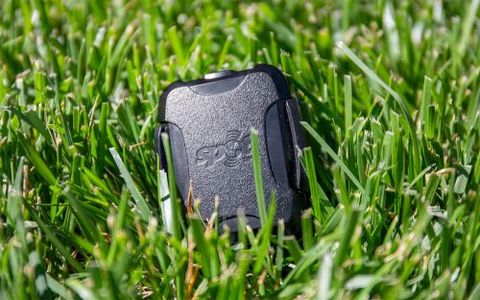 The SPOT Trace is for adventurers but it’s not very user-friendly.

This GPS tracker is rugged and compact, so you don’t have to worry about breaking it or getting it wet. In fact, it’s rated to withstand being submerged in 1 meter of water for up to 30 minutes. We tested by dunking it in a large cup of water for 10 minutes and it kept working afterward without any problems.

This tracker and the SPOT Gen3 have a lot in common, but we liked this tracker less because it only has one button on it. It’s not intuitive to use and the blinking LED light near the power button doesn’t really tell you what the device is doing unless you’ve read the instructions thoroughly. After you sign up for a subscription you can set the tracker to communicate every 2.5, 5, 10, 30 or 60 minutes. The more often you’re tracking, the more battery life it uses. Still, the device goes to sleep when it’s not moving so you get a lot more battery life than some of the other devices we tested like the Pocketfinder+, which only lasted for 12 hours. Once the device dies you’ll need to replace the 4 AAA batteries.

It depends on what you’re going to use the Trace for, but it has several features you may find useful. Dock mode will monitor something primarily stored in water or movement alerts will tell you if the tracker has moved at all. You can also set up a daily status alert so you won’t have to wonder if the Trace is still working. However you use the Trace, you can track on your desktop browser or a free app on your smart phone.

To test this tracker we drove it around while it was set to communicate with the app every 5 minutes. It did so, but it isn’t as by-the-minute as other real time trackers like the Veriot Venture. We were able to get within about 100 feet of the tracker using just the map, which was common among the trackers we used. We also took it out to a very remote hiking trail in the mountains and discovered it and the other SPOT tracker were the only two that worked. Nevertheless, it definitely took longer than 5 minutes to update the location and lacks the SOS button of the Gen3.

The Trace app is easy to set up, it’s just not as pretty to look at or fun to use as some of the others we tested. The power button, slower tracking rate and the fact that you must pay a monthly subscription for all of it just isn’t worth it. This tracker isn’t the best one out there, but it could be useful if you’re particularly worried about using one that is durable.