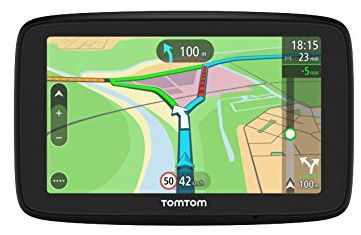 The TomTom GO 52 has a small screen and a cumbersome mount but overall the device performs similarly to top-of-the-line navigation devices considering its budget-friendly price point.

The TomTom GO 52 is a car GPS preloaded with maps of the United States, Canada and Mexico that are ready to use without a GPS or cell signal. This model makes use of 3D maps and landmarks, which portrays the approximate height and build of the landmarks surrounding your route. Three-dimensional maps make navigation, particularly in a city, much easier. However, the GO 52 doesn’t have all of the features you’ll find in the best navigation GPS units.

The most unique feature of the GO 52 is its Destination Prediction feature. The navigation GPS learns the routes you most commonly drive, such as to and from your workplace, then it automatically saves them to the My Places folder. This allows you to access navigational directions for it with the press of a single button. There’s an option for manually entering an address, or you can opt to select a waypoint from the millions of points of interest that come preloaded onto the device, like a restaurant, hotel, gas station or store.

The GPS system ships with preloaded maps of continental North America, but if you want maps for additional regions, you can acquire them from TomTom’s website and save them on the device. With the GO 52, the navigation is based on the most efficient and up-to-date routes, as it comes with free map updates for the life of the device. It also offers you free traffic alerts if you pair your smartphone to the device via the TomTom MyDrive mobile app.

It has built-in lane assistance, which tells you the best lane to be in during your commute and guides you into the correct lane prior to an upcoming turn. It also has a handy automatic reroute function, so if you take a wrong turn, the device will automatically recalculate and change your route accordingly.

The device’s mount has a clunky feel to it. Whereas mounts for other units are magnetic, such as that of the Rand McNally OverDryve, this one has a suction cup. You can opt to attach it to your dashboard or windshield. It has limited pan and tilt functionality so you can slightly adjust where it points.

The TomTom GO 52 is an affordable navigation GPS option, plus it comes with lifetime map updates and traffic alerts. Although it doesn’t have as large of a display as the best GPS devices in our comparison, it’s still packed with tons of features and functionality, especially considering its low price point.