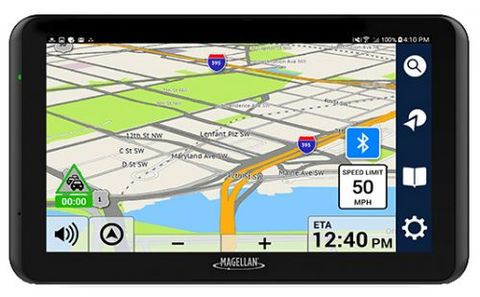 Though it isn’t as functional as it is beautiful, the Magellan RoadMate 7771T-LMB has a variety of convenient features and considering its price point.

The Magellan RoadMate 7771T-LMB is a car GPS with lifetime map updates and traffic alerts included in its purchase price. It comes preloaded with maps of the United States, Canada and Puerto Rico. The GPS system is middle of the road in features and overall ease of use, but it has a few premium features that balance it out.

This GPS has standard navigation features, like landmark guidance that gives you directions centered around landmarks, not just mileage. So, instead of saying, “In 500 feet, turn right,” the device might instead say, “Turn right at the Shell station in half a mile,” giving you something to visually identify and confirm. It also has lane assistance, which guides you into the correct lane to make your next turn. Speed limit alerts tell you the speed limit of the road you’re driving on so you can abide by local traffic laws and avoid getting a ticket. The built-in traffic camera detector helps you locate speed-checking devices that can also help prevent a potential ticket.

Thanks to its built-in rerouting capabilities, the RoadMate 7771T-LMB can recalculate your best route options in case you miss a turn. And with 7 million included points of interest – including stores, gas stations and restaurants – you can easily find your favorite stores in any area. You can program in one or multiple stops within your journey and the 7771T-LMB will create the most efficient route to each stop. You can choose from preset points of interest or even set your own custom stops, such as your workplace or child’s school.

The unit uses a capacitive touchscreen display, which is far more responsible and user-friendly than lower-end resistive screens. It has an impressive 7-inch display, with a resolution of 800 x 480 pixels, which is on par with the best GPS device, the Rand McNally OverDryve. The battery can run the device autonomously for up to an hour in case you need to use your car’s DC outlet temporarily for something else.

The Magellan RoadMate 7771T-LMB is a feature-rich GPS and boasts a high-definition display that’s larger than most other devices on the market. Though lacking a few features, like compatibility with modern smartphone assistants, it’s still good at guiding you to your destination and has some extra functionality included.