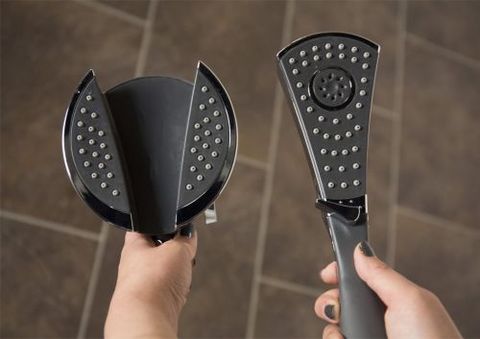 The Delta In2ition two-in-one shower has an interesting design, but its overall performance was lacking.

We were excited to try the Delta In2ition two-in-one shower. It has an appealing, unique design that gives it a spa-like impression. It looks expensive and luxurious, which is usually how you want bathrooms to feel. It was also simple to install: as easy as all the standard handheld shower heads we tested and easier than the other two-in-one unit. It comes with the stationary head, a flexible metal hose and the hand shower. We were disappointed to note that the installation instructions called for thread-seal tape, even though this was not included. Other products that called for the tape, including the Speakman Rio, put a small roll into the packaging.

Once we had it installed, we tested the In2ition, which has a maximum flow rate of 2.5 gpm (gallons per minute), and measured its actual flow rate at a water source with 48 psi (pounds per square inch) of pressure. This would be pretty average water pressure for a house. It ended up putting out about 1.6 gallons per minute, which was slightly higher than most shower heads we tested, but lower than the highest tested flow rates. Testers remarked that the water pressure could have been better on all of its settings.

The In2ition has four settings: full body spray, fast massage, pause, and combination full body with massage. You can switch between settings with a thumb toggle on the wand. You can also switch water flow between the fixed head, the hand held and both. Running water through only the fixed part is odd, though, as the wand makes up most of the nozzles and jets of the shower. Removing the wand from the shower leaves just a few holes on either edge of the head. It is nice that the handheld part slides into place, as it is less likely to just fall out of its holder than some other models, but we ended up liking the design more in theory than in practice. Still, the In2ition performed better than the other two-in-one shower head we tested, the Hydroluxe.

After testing, we concluded with the opinion that the Delta In2ition two-in-one shower head is best suited for households who usually use a fixed shower but would like to have the option of using a handheld occasionally, such as for cleaning the tub or washing a pet. It is available in chrome and stainless finishes and is covered under Delta’s limited lifetime warranty.