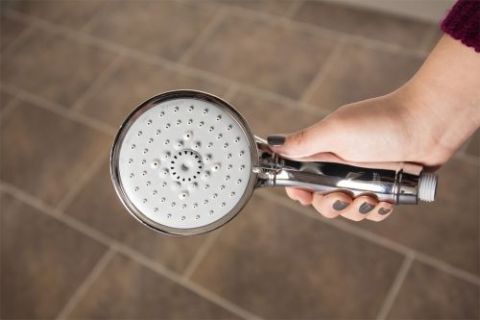 The New Tempesta Rustic is a simple shower head with mostly gentle settings and no good massage function.

The first thing that concerned us about the Grohe New Tempesta rustic hand shower is that it came in a box that only included the shower head. There were no accessories or installation instructions. It’s not like a shower head install is the most difficult process in the world, but it’s nice to have a graphic or diagram in case something doesn’t seem to fit. And unless you already have a hose and bracket, buying these necessary accessories is an added expense.

In our tests, we rated the New Tempesta shower head lower than any other product for its overall efficacy, water pressure and water coverage. Its four spray settings are labeled, which is a feature we liked, but the modes were not particularly distinct, except for one jet spray that was too small and so hard it nearly stung. The settings are rain, Grohe Rain O2 (which uses large, air-infused droplets), massage and jet. Most other products we reviewed had much better spray pattern variation and generally better settings. We recommend the Speakman Rio as the overall best handheld shower head and the Waterpik PowerSpray+ Twin Turbo for value shoppers. The New Tempesta Rustic is also missing any water-saving features, and you can’t purchase it in a lower flow rate to meet some local regulations.

In our flow rate tests, the New Tempesta put out slightly less water than most other shower heads. Like all the products we tested, it has a maximum flow rate of 2.5 gpm (gallons per minute). At 48 psi (pounds per square inch), the Grohe shower head was putting out an actual flow rate of 1.4 gpm. You could feel the lack of water in the lackluster pressure. If you’re looking for a shower that feels the most like actual rain (but a bit too gentle for normal showering), this could work for you.

The New Tempesta Rustic is available in chrome and brushed nickel, both of which are Grohe’s StarLight finishes. This is supposed to protect the finishes against tarnishing and scratches. The spray face of the shower head is 4 inches across and is either gray or blue-gray, depending on the finish. The nozzles are silicone and prevent clogging and limescale buildup. Grohe offers a limited lifetime warranty on its showerheads, covering defects in materials or workmanship.