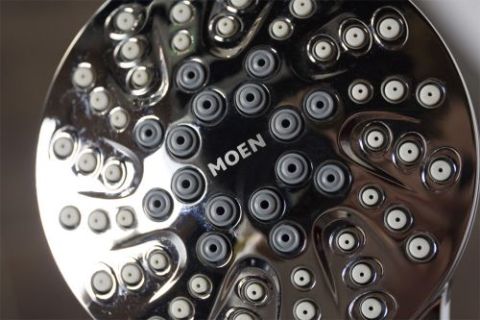 The Moen Engage Six-Function hand shower gives you a satisfying shower, and its unique features make it the best-designed shower head.

You can tell that a lot of thought and design work went into making the Moen Engage six-function shower head look simple. It augments its classic hand shower form with elegant details such as the spiraled arrangement of its spray nozzles and mirror chrome finish. It capably combines form with function, delivering one of the best overall showering experiences of any handheld shower head we encountered in our tests.

The Moen Engage earned the top scores for overall shower efficacy and usability in our user performance tests.

We liked the water pressure across its six settings. Its intense shower setting, in particular, was exactly what we want in a shower. Its pressure and coverage would make it easy to lose track of time and just stand under the water for a while. It’s also up to the task, according to one tester, of drenching thick, “floofy” hair. It doesn’t have quite as large a spray radius as the Speakman Rio, our number one pick, but it doesn’t seem to be lacking. We tested the 2.5-gpm (gallons per minute) flow rate model of the Engage at a water source with 48 psi (pounds per square inch) of water pressure, and our measurements put its actual output at 1.5 gpm, which was typical in our tests.

The Engage has a variety of settings, from a gentle rain-like spray to a blast massage setting, but we did notice that two of the six settings were pretty much indistinguishable. Even so, that leaves you with five diverse options. The massage function is good, but not the best we tried, so if you’re mostly interested in massage settings, we recommend checking out the Waterpik PowerSpray+ Twin Turbo.

We rated the Moen Engage high in usability because everything about this shower head has been simplified to be easy to use. Though all the products we tested were straightforward to install, Moen provided the easiest instructions to follow, and the overall setup process took about a minute.

The Engage six-spray shower head has, predictably, six spray modes. It is notably missing a water-saving or pause setting, something which other of our top picks do include. Though we did find that we liked the option that a pause, dribble or mist setting offered in other products, we don’t think this should be a deal breaker, especially since the Engage doesn’t have a higher than average flow rate. The 2.0 gpm flow rate, WaterSense model of this product does not have this feature either.

The Moen Engage does, however, have the best feature of any hand shower we tested. There are magnets attached to the bracket at the end of the shower arm and the back base of the shower face. Moen calls this magnetix technology. This magnetic docking system is more than a fun novelty; it is extremely practical in an environment where you often have your eyes closed and things can be slippery. We loved that it always makes sure the shower head is pointed straight ahead.

Because it mounts near the top of the shower head instead of the base of the handle, the Engage sits lower on the shower arm than other hand showers, making it great if your shower arm is a bit high or if the shower is also used by children. The downside of this is that the Moen Engage could potentially sit too low for taller folks.

You can find the Engage six-spray in two color options: chrome and spot-resist brushed nickel. It comes in a large box with the shower head, magnetic bracket, hose and instructions.

Moen offers a limited lifetime warranty on its shower heads, covering defects in materials or workmanship. You can reach customer support by phone or email, which guarantees a response within 48 hours. Instructions, help videos, warranty information and FAQs are also available on Moen’s website.

The Moen Engage six-function shower head is an attractive product, both because of its appearance and because of its extreme practicality. It will look at home in any shower and has enough settings that you’ll be able to find one you love. Its combination of beautiful and sensible features make it the best designed shower head we tested.