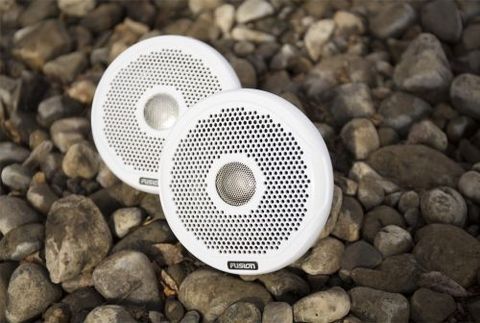 When it comes to boat speakers, the Fusion FR6022 achieves exactly what you want: great sound, good power handling and unparalleled durability.

Fusion Electronics is a company that originated in New Zealand, where boating is common and the elements are harsh. This is one of the few manufacturers on the market that specializes in marine audio equipment. So, it's not surprising that the Fusion FR6022 is one of the most durable marine speakers we reviewed. It undergoes tests that far exceed current marine speaker standards for durability. And it shows. Just holding these speakers in comparison to holding other speakers demonstrates how much sturdier the construction is. When you combine this with the excellent audio quality and power handling specifications, it's clear why the Fusion FR6022 is our pick for the best marine speaker overall.


The overall audio quality of the FR6022 was among the best I tested, receiving an A grade for the overall performance. Only the Clarion CMQ speaker received a similar grade, though they are practically opposites in terms of their audio profile. The Clarion performed best in the low end, but got steadily worse as it got higher (though the highs were still very good). Conversely, the FR6022 is excellent in the high frequencies and has good, but not great, low-end sound.

In the audio frequency tests, I recorded it playing a 20Hz to 20kHz tone and graded the frequency range performance using frequency signature software. With the lows, the FR6022 earned a B. But the midrange and high frequencies were excellent, receiving an A+ and A- respectively. If you paired these speakers with a subwoofer, the audio performance would be impressive. Overall, the performance is exceptionally balanced when compared to other speakers. I suspect the reason the low end didn't perform as well as some speakers is because of the grille, which isn't designed to move air as freely as other grilles. That said, you can opt for a more open grille, which should improve the bass.

The lowest frequency response, as provided by the manufacturer specifications, is 70Hz, which is about as low as a baritone saxophone can play. In our frequency tests, however, the first audible tone was about 35 Hz, which is closer to the lowest note on a standard-tuned bass guitar. That said, the quality of the low-end frequency didn't become apparent until around 100Hz, which was one reason why it received a B.

The FR6022 has a sensitivity rating of 90 dB, which is average. In fact, it's 3-dB lower than the sensitivity rating of the Polk MM1-652 speakers, which has the highest rating for a marine speaker. This may not seem like much, but it presents a significant difference in the speaker's efficiency because physics says that every 3-dB increase in volume requires twice as much power. This means that if you use 25 watts with the Polk MM1 to reach 100-dB, then you'd need 50 watts to reach 100-dB with the FR6022.

However, my comparative loudness test, which measured the volumes produced by each speaker when using the same power, suggest that the sensitivity ratings may not be as accurate as manufacturers suggest. In this test, the FR6022 earned a B and was the fourth-loudest speaker, which is what I expected from its sensitivity rating. But the Polk MM1, which is supposed to be twice as efficient, was actually the fifth-loudest speaker. In other words, while the sensitivity rating is often emphasized by audiophiles and manufacturers, it's not always telling the whole truth.

The continuous power handling is 100 RMS watts and the peak power handling is 200 watts, which means this speaker can handle more power than most speakers I reviewed. It's certainly capable of pushing your music past the wake.

While most manufacturers don't make marine speakers a priority in their product portfolios, Fusion specializes in marine audio. This means that its products have comprehensive durability features, including the company's own True Marine testing standards, which exceed the ASTM standards for salt, fog and UV protection. The FR6021 is also certified for IP65 standards of water and dust resistance. The polypropylene woofer and titanium tweeter can handle life on the water.

It also features a completely sealed crossover, magnet and tweeter housing. This protects vital components like the voice coil, spider, and wiring from deterioration due to high humidity and water exposure. I spent hours handling the 10 best marine speakers, and these definitely feel the most capable handling salt spray, hours in the sun, and rogue waves.

The Fusion FR6022 is our pick for the best overall marine speaker because it sounds the best and can handle more power and elements than others. The continuous power handling is among the best available, which is important because the 90-dB sensitivity rating is average, and the durability is unmatched. The FR6022 speakers are exactly what you imagine when you think of boat speakers.