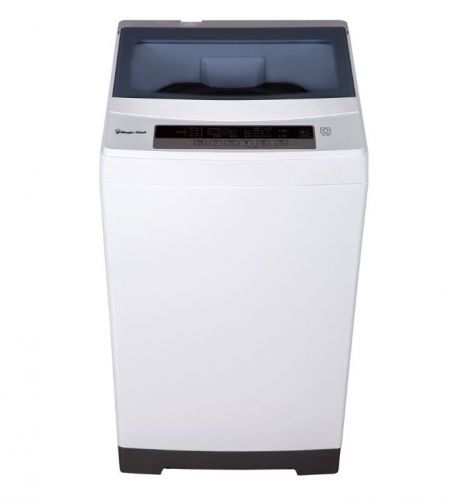 This is not the machine for big loads but its compact design is fantastic for efficiency and portability.

The MCSTCW16W4 will cost about $8 a year to run, according to the Energy Guide label from the Federal Trade Commission. That’s $4 less than the next best one. It may sound like a small amount of money but efficiency adds up over the years of ownership. One of the units we compared costs almost twice as much to run a year, and it has a smaller capacity than MCSTCW16W4. This machine is incredibly efficient. Its annual electricity use is just 63 kilowatt hours. The average among the ones we compared is 108 kilowatt hours. In fairness, it also ties for the smallest capacity, and that goes into the impressive efficiency, but its 1.6-cubic-foot capacity is actually pretty typical among portable machines.

All of the models we looked at are tiny next to a full-sized machine but this one is especially small and that can be very helpful for small kitchens and closets where portable washing machines generally live. This one weighed less than all but one of the others in our comparison and tied for the smallest when you consider depth and width. It was not dramatically small but even subtle differences can impact how easy it is to roll over to the faucet and squeeze into a corner for storage.

This portable washing machine tied for the fastest spin speeds, too. That can make a difference in how much water is removed in each cycle, and shortens drying times.

You do not get a ton of variety in cycle types with this unit but the important options are there. You can do a delicate or a heavy load and there are also options for quick or bulky loads. You can delay the start of your cycle to coincide with your arrival home. There is a control lock so children do not have the option of changing your settings. You can also add an extra rinse to the end of any cycle. This washer has a power loss memory function so if you lose power, it will automatically resume the previously-selected cycle.

There is no specific dispenser for fabric softeners but you can still use them. Many competing units do have that so that is one drawback. There is a specific spot for detergent.

The MCSTCW16W4 is the least expensive unit we compared this round. It is almost $200 less than the next least expensive. It is small, though, and it does not come with wheels so you have to buy a dolly separately to get it to and from your faucet. One dolly we researched that fits was only about $20.

If you need your portable washer to tackle bigger loads the MCSTCW16W4 might not be the best choice. In every other way it is ideal. It is incredibly compact, inexpensive and efficient. It could fit into the smallest of spaces, including RVs, and be right at home, all while getting your clothing clean, and less damp with its super speedy spin speeds.