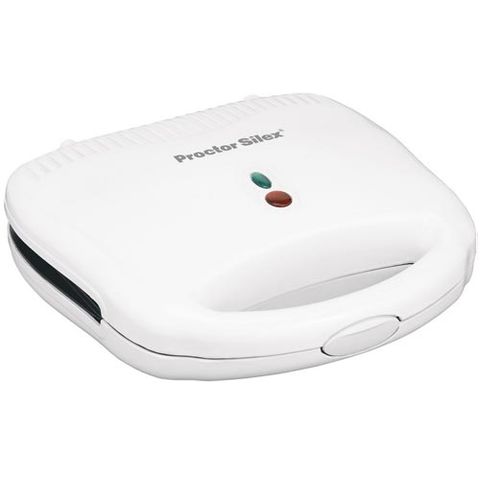 You can make flavorful sandwiches with this kitchen appliance, but not genuine paninis.

Even if you have a small kitchen and a tight budget, the compact and space-saving Proctor Silex Sandwich Maker can turn out some tasty sandwiches in short order. This sandwich maker does not take up too much room on your countertop or inside your cupboard when you are done, and it is affordable, so it will not dent your wallet.

This handy device is simple to use. Unlike with traditional panini makers, you get a single flat grilling area that provides even toasting for the surface of each bread slice. When this sandwich maker is on, you will know, since a yellow light appears. Once the temperature reaches a suitable cooking level, a green indicator light snaps on so you know it is time to put the food in place. The indicator light turns on and off during the cooking process, which is normal.

This is quite a small sandwich toaster, with a cooking surface totaling 77 square inches. With this size, you can make only two standard-sized sandwiches at one time. If you use bread that is even just a bit bigger than usual, you will need to make sandwiches one at a time. If this is too small, check out the DeLonghi Contact Grill & Panini Press CGH800 that has 112 square inches of cooking space.

Although you can make a fine-tasting panini with this kitchen appliance, one thing it's missing is a genuine grilling surface. It does not have the ridged grill patterns featured on panini makers, so your result will not boast the attractive stripes found on regular paninis.

In our tests of this sandwich maker, a panini made with bread, turkey, cheese and a pesto sauce turned out just fine as far as flavor, but aesthetics were a different story. It looked decidedly like a standard sandwich, rather than a panini.

Our test of making a grilled cheese produced a somewhat unusual sandwich that had an evenly toasted piece of bread on top, although the toasting was a bit light. The bottom slice also was evenly toasted, but it was a bit brown. While this tasted good, it was a bit sticky getting the cheesy sandwich off the surface.

When we conducted our temperature testing, we placed white bread slices over the entire cooking surface from one edge of this sandwich grill to another, and this produced excellent results. We found even browning on every slice of bread. The top level of the press was 225 degrees, while the bottom was 195 degrees.

This sandwich maker has a nonstick surface, so cleaning it is easy. You can simply wipe it off or wash it, and we found it took slightly less than two minutes to clean. After that, you can shut the sandwich maker, employ a clip lock on the handle to hold it shut, and store it upright. It comes with a convenient cord wrap feature in the back so the 24-inch cord does not get in the way or take up extra space. This sandwich toaster is also equipped with a heat-resistant handle, and it is nice to know that the outside of the appliance stays cool, for safety's sake.

The budget-friendly Proctor Silex Sandwich Maker offers even toasting and is easy to clean and store. Its small cooking surface makes it ideal for one- or two-person households, and it can be stored upright. However, it does not make genuine paninis.