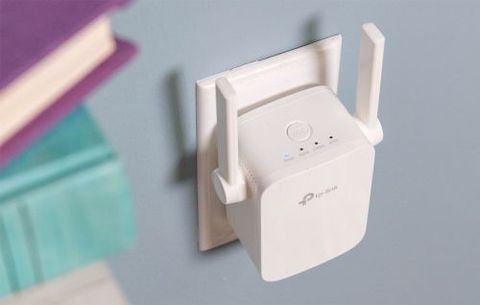 The TP-Link RE305 is an inexpensive AC1200 range extender that boosts your Wi-Fi coverage better than most other products.

The TP-Link RE305 AC1200 is both one of the least expensive and one of the best-performing Wi-Fi extenders we tested. Its helpful setup features and easy-to-use Tether mobile app make it our best value pick.

The RE305 is a small wall-plug device that features Wi-Fi Protected Setup (WPS), helpful LED status lights, two rotatable external antennas and dual band connectivity. Although it has almost every feature we evaluated, it has a Fast Ethernet port instead of a Gigabit Ethernet port. With AC1200 speeds, the RE305 can handle Gigabit Ethernet wirelessly, so it doesn’t make sense that the device would introduce a speed-limiting factor into its design. Fast Ethernet speeds top out at 100 Mbps, so any device connected to the extender with a wired connection only gets a 100 Mbps connection at best. And if you plan to use your extender as a wired access point, the port limits the broadcast Wi-Fi signal to 100 Mbps as well. The Fast Ethernet port does not affect wireless speeds or connectivity when the RE305 works as an extender, so it’s still one of the best options for expanding Wi-Fi into dead zones.

Wirelessly, the RE305 has max speeds up to 300 Mbps on the 2.4 GHz band and 867 Mbps on the 5 GHz band for a combined max throughput of 1,167 Mbps. This more than covers the needs of most home networks. We tested it in our office and lab, and it easily handled our 400 Mbps+ network speeds. In fact, it offered the second-best performance. Most Wi-Fi extenders we tested only managed to capture and rebroadcast a portion of the original wireless signal, but the TP-Link extenders, including the RE305, RE450 and RE650, maintained or improved network quality in almost all our tests. We conducted all tests using Ixia’s IX Chariot to monitor network speeds both with and without the RE305 between the router and end-user laptop. The RE305 performed particularly well in our 150-foot line of sight test and a multi-story test where the router was placed in an enclosed, soundproofed room 30 feet away from the extender, with the test laptop 35 feet away and a floor above the extender and router. Our multi-floor tests were designed to mimic conditions in a house with obstructing walls between the different components of your network.

In addition to its great performance, the TP-Link RE305 is also easy to set up and use. It is compatible with WPS, which makes setup even easier if your router also supports WPS, but it comes with clear instructions for both WPS and manual setups. The status LEDs for individual frequency bands are useful since each band creates its own network. The signal strength light is useful for finding a good spot to place your extender, as it lets you know when the signal between the extender and router is sufficient.

Overall, the RE305 is a great Wi-Fi extender for a great price. It may not be the best choice if you need a wired connection or wired access point, but its wireless network extending performance, simple design and easy setup make it an amazing value option.

Top Ten Reviews has reviewed the Best Wi-Fi Boosters of 2019 so that we're able to offer you the authoritative buying advice you expect.