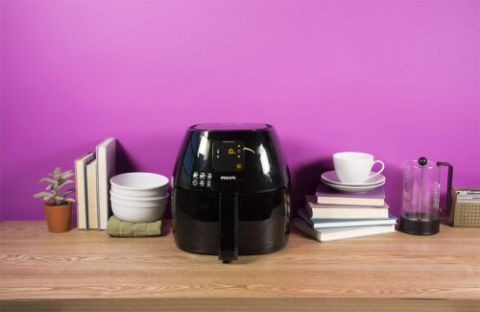 Notwithstanding a few flaws, this is an excellent machine, especially if you are cooking for a large group.

The Philips Airfryer XL turned in the best performance of all on our cooking tests. This machine was better than any other at cooking evenly from one end of the basket to the other. Foods came out crispy and delicious, especially the fries. Our chicken wings also were impressive. That being said, it creates a lot of smoke, it’s loud and it’s hard to clean, keeping it shy of our top pick. Beyond that, it is large and expensive – about double the average price of the others in our lineup – but it is an impressive machine. If you do a lot of deep frying for big groups, this might be worth the investment, though, in order to fry in a healthier way. If you need something more compact, consider the Bella Air Convection Fryer.

The bottom of the Airfryer XL cooking chamber has fan-shaped grooves meant to distribute the airflow evenly. Our tests indicate that the design works – at least the food tests. Our temperature testing highlighted pretty big gaps in the temperature from one side to the other, but we were only testing surface temperatures, not the temperature of circulating air during the cooking process. Judging by the universal crispiness of every wing and french fry, this one does a practically perfect job of moving the air into every corner of the interior.

This unit is also easy to use. The controls are digital and intuitive. Its cooking compartment is on a track so the basket doesn’t have to click into place, which was a surprisingly difficult task on some of the machines. With the Airfryer XL, you just slide the compartment out on its track and lift the basket out. Most units recommend shaking the basket mid-cycle to rotate food for more even results. That process was easier on this machine than the others, because of the track.

Some drawbacks to this machine are that it is loud and very smoky. All of the fryers produced more smoke than we expected, but this one was the worst for that. It was also tough to clean. This was one of few that had a cooking basket made of wire, like hot-oil fryers. That means there are lots of tiny grooves to get clean. The denser metal baskets on competing air fryers had larger openings that didn’t trap food as much. We pre-soaked the Philips basket, but it still took some effort to get it totally clean. At least you have the option of throwing it in the dishwasher.

The warranty is only one year on this product, which is fine, but some competitors have longer coverage. Philips offers decent customer support, with an online manual and FAQs within easy reach.

The Airfryer XL is large, loud, smoky, expensive and hard to clean, but it produced food that was practically perfect. The fries and chicken we prepared were evenly cooked and crispy, without using oil. It could be worth the investment if you want large quantities of air-fried foods.