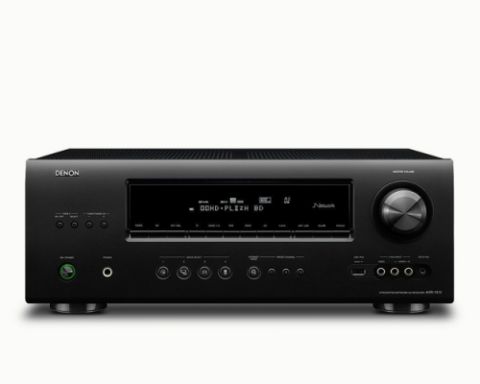 The Denon AVR-1912 is a well-rounded and advanced AV receiver with great unique features.

AV receivers are products designed to connect all your media devices such as speakers, televisions, mobile players and more to one another. The Denon AVR-1912 is the most proficient and advanced AV receiver on the market today. Its strong sound capabilities, wide connectivity array, iOS compatibility and intuitive GUI earn this unit a top spot among the best AV receivers.

First things first, the Denon AVR-1912 supports 7.1 channels of surround-sound technology. This means you can route surround sound to seven speakers and a subwoofer. The option to run a single channel to each speaker gives you to the ability to experience movies, music and more in the full, rich sound in which the creators originally recorded and mixed it.

The bandwidth response of the Denon AVR-1912 runs from a minimum of 10Hz to a maximum of 100kHz. This response range is standard among the best AV receivers available on the market today. Despite its boilerplate status, this statistic means that the sound fidelity produced by the Denon AVR-1912 will always be high quality, no matter what kind of media you decide to pump through it.

Total harmonic distortion on the Denon AVR-1912 weighs in at a very light 0.1 percent. This is another indicator of the clarity of sound produced by this AV receiver. Any number below 0.5 percent is purely an academic statistic because hardly anyone can detect harmonic distortion that low.

When you connect the Denon AVR-1912 to a speaker system, each channel of sound draws a maximum of 110 watts. Of all the AV receivers on our side-by-side comparison chart, only three products put out less power per channel. In addition, the total power consumption of the AV receiver itself is 460 watts. That's not the lowest number we've seen, but given how much this unit is capable of, it's a healthy statistic.

The Denon AVR-1912 includes every connectivity option we looked for when we rated and ranked AV receivers. Denon was wise when it allocated the space on the back panel of this unit. The company understands the changing tides of connection technology. More and more devices are using HDMI rather than aging analog connections such as component, composite and coaxial.

The number of HDMI ports on the Denon AVR-1912 allows you to connect nearly every digital media device you have to this AV receiver. On the unit's back panel, you'll find six HDMI in and one HDMI out port. This means you have the ability to connect an HD television, digital camera, Blu-ray player and a computer to the receiver and still have room for more devices.

Conveniently located on the front panel is the unit's USB port. This port enables you to connect a wide variety of digital devices. Not the least of these are iOS devices; the Denon AVR-1912 is specifically designed to take full advantage of your iPhone, iPod or iPad, but more on that later. This port combined with the HDMI ports on the rear of the machine make this AV receiver compatible with nearly every digital device available on the market today.

The front panel of the Denon AVR-1912 also includes a headphone jack and an AM/FM tuner. If you want to be old-fashioned and tune in some broadcast waves, you can listen to them through your surround-sound speakers or pipe them through your headphones. This is not to say that the headphone jack only works the radio tuner; it certainly works with every type of media connected to the AV receiver.

Dolby Digital Sound is where audio technology begins and ends for almost every audio and video media. Nearly every television show, movie or other professional production is captured, recorded or mixed in some flavor of Dolby audio technology.

Compatible formats include Dolby Pro Logic II, Dolby TrueHD, Dolby Digital+, Dolby Digital Surround EX and all the flavors of DTS. The fact that this AV receiver is compliant with all these sound formats means that you hear the rich sound exactly the way the content creators intended you to hear it.

The other sound format worthy of note is THX. That's the sound standard pioneered by Luscasfilm that is used in millions of movie theaters throughout the world. The Denon AVR-1912 includes a decoder for this sound format, thereby covering all its sound bases. Therefore, every DVD, Blu-ray Disc or even VHS tape you own plays in its originally mixed sound format.

The Denon AVR-1912's graphical user interface (GUI) allows you to interact with any media device connected to the unit via its digital connectivity array. This display also gives you access to the AV receiver's internet-streaming capabilities. Services such as Rhapsody and Pandora are available through the receiver and are routed to your speakers or television.

As we mentioned earlier, the Denon AVR-1912 is fully iOS ready. Connect your iPod, iPhone or iPad to the unit via its USB port on the front panel. Then the unit plays all the content stored on those devices. Furthermore, you can use your iOS device as a remote control. Just download the remote control app through the iTunes app store. Once that is installed, you have the ability to control and manipulate all the functions and settings on the Denon AVR-1912 with your iOS device.

When you're dealing with AV receivers, it's all about sound capacity, connectivity and compatibility with the latest mobile media devices. The Denon AVR-1912 posses a strong connection array, delivering video and sound to the most advanced speakers and televisions. It also is fully compatible with iOS devices such as the iPhone, iPod Touch and iPad. You can even use those devices as a remote control for this AV receiver. Compound that with its innovative audio technology and you get a product that stands head and shoulders above its competition in this category.