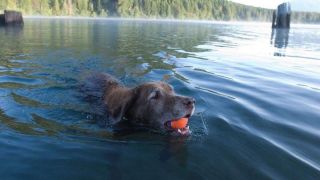 Owning a dog has been found to increase the life expectancy of people recovering from heart attacks and strokes, according to a new report published in the American Heart Association’s Circulation: Cardiovascular Quality and Outcomes journal.

The study centers on research in Sweden, which was conducted over a 10+ year period and draws on a pool of over 370,000 heart attack and stroke victims using the country’s National Patient Register.

It discerned that, among dog owners, the risk of death for heart attack patients living alone after hospitalization was 33% lower than that of non-dog owners – and 15% lower for those living with a partner or child.

For dog owners who had suffered a stroke, the risk of death for those living alone was 27% lower compared to non-owners, and 12% lower for those who cohabited with friends, family or a partner.

The increased social interaction and physical activity that typically comes with owning a dog contributed to the reduced risk, the research team concluded.

She added: "Furthermore, keeping a dog is a good motivation for physical activity, which is an important factor in rehabilitation and mental health."

A comprehensive meta-analysis by academics at the University of Toronto and the city's Mount Sinai Hospital supports the findings from Uppsala University.

Drawing on 10 different studies and patient data from 3.8 million people, it concludes that dog ownership lowers a person's overall risk of death by reducing the likelihood of cardiovascular-related mortality.

"The findings in these two well-done studies and analyses build upon prior studies and the conclusions of the 2013 AHA Scientific Statement 'Pet Ownership and Cardiovascular Risk' that dog ownership is associated with reductions in factors that contribute to cardiac risk and to cardiovascular events," said Dr. Glenn N. Levine, M.D., on behalf of the American Heart Association.

If you've been thinking about getting a dog, the strength of this evidence might help tip the balance in favor of a new best friend.

But if your personal situation isn't conducive to owning a pet, fear not: many of the best smartwatches now offer integrated ECG (electrocardiogram) testing, which can help you monitor your heart health as well as motivation to get up and move. You won't need a pooper scooper, either.