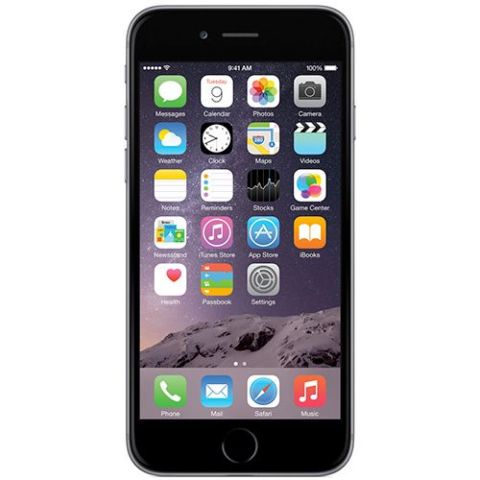 Apple's smartphone has finally entered the modern, big-screen era, and successfully. The iPhone 6 is a joy to hold, a joy to use, and Cupertino's best smartphone yet.

Calls:
to the US, Canada, Mexico & China
Visit Website
at
Tello
We check over 130 million products every day for the best prices
View All Deals
powered by

Editor's Note: Apple recently unveiled details on its next two flagship phones, the iPhone 6s and iPhone 6s Plus. Along with speedier processers and improved graphics capabilities, both phones will sport updated Touch ID sensors, 12-megapixel cameras capable of shooting 4K video, and a new innovation in the smartphone world: 3D Touch. By using force sensors that can detect how hard you push on the iPhone's screen, 3D Touch will let you peek into notifications, emails and apps with pressure-based gestures.

You can preorder the iPhone 6s and 6s Plus as of September 12, while the devices themselves will arrive in stores September 25. Top Ten Reviews will get you our official reviews and comparisons of each model as soon as we get our hands on them.

Editor's Note: This review has been removed from our side-by-side comparison because it no longer ranks as a top 10 product. The original review is below, but check out our current top 10 about Smartphones here.

Apple is probably the only electronics company that can upset the smartphone status quo with a single announcement. When the iPhone 6 became official, longtime fans hammered the company's servers and stores for the privilege of being one of its first owners. Apple landed record sales, and now the iPhone 6 is out, along with its even-bigger sibling, the iPhone 6 Plus.

The iPhone 6 is, in short, amazing. Sure, there are still bugs in iOS 8 that need to be worked out. Despite making a valiant effort, the phone's 1810 mAh battery can't quite compete with the 3000+ mAh beasts you'll find in other flagships. And we really wish we could plug a microSD card in for extra storage space.

But those hang-ups haven't stopped us from loving this phone. It's unbelievably thin. Its screen is stunning. And Apple's A8 chip screams through benchmarks and makes easy work of the latest games on the App Store. Sure, it might not be perfect for everyone, but it's still a spectacular phone.

Apple is the standard by which every other smartphone manufacturer is measured; it's tough to compete with the design team in Cupertino. The iPhone 6's rounded frame is elegant, its buttons are nice and clicky without needing too much force to depress, and the glass on its front feels – if you'll pardon the term – luscious. Some owners might not like the white, gel-like plastic bands that rim the top and bottom of the phone's rear cover (put there to help the antenna communicate with cell towers), but they're no eyesore.

The first thing you notice when you pull the iPhone 6 from its packaging is its form-factor. You might not think removing a couple millimeters would make much difference, but it's instantly apparent here. At a mere 0.27 inches thick, the iPhone 6 is the thinnest smartphone we've ever held. And at just 4.55 ounces, it's the lightest in its class. It still feels weighty and premium, thanks in great part to that aluminum-and-glass construction; it just won't put any extra stress on your wrist.

Turn the phone on, and you're greeted by a display that is one of the nicest you'll find among any top smartphone. With the recent launch of so many QHD screens, a display resolution of just 1334 x 750 might seem mediocre. In practice, however, the iPhone's display is bright and rich without being oversaturated. You can view it from virtually any angle without losing brightness or color, and thanks to the aforementioned glass, touching the screen is a perpetual pleasure.

When our office first watched the original iPhone 6 announcement, there was an audible groan as Apple pointed out the new camera's specs. It seemed little had changed from the iPhone 5s: the 6 would once again sport an 8-megapixel sensor with an ƒ/2.2 aperture. The front-facing camera would only capture 720p video, instead of the 1080p that virtually every other flagship manages. Yes, the iPhone has long been considered one the finest smartphone cameras in the world, but would we really get nothing new?

We shouldn't have worried. At only 8 megapixels, captured images are smaller and less suitable for cropping than what you might get out of a 13- or 16-megapixel camera, but their quality is top-notch. The A8 chip is doing some great behind-the-scenes work to translate your pictures into stunning photos, with beautiful color reproduction and crisp results. You'll have to buy the iPhone 6 Plus if you want optical image stabilization, but the iPhone 6 still manages to capture striking stills and smooth video. Plus, the 240 fps slow-motion mode is pure fun.

It's no surprise that Apple doesn't advertise the clock speed of its A8 processor; at first blush, it seems like it should be slow. In a world of 2.7GHz chips, wouldn't a 1.4GHz CPU be considerably less powerful? In this case, however, the numbers don't tell the whole story. Between its 64-bit, desktop-class architecture and the "Metal" firmware that gives applications low-overhead access to all those transistors, the A8 chip screams. Our in-house benchmark tests saw the iPhone 6 rocket past its competitors in GFXBench and Basemark, and perform respectably in 3D Mark.

Fast though the processor may be, we truly wish Apple would build expandable storage into its iPhones. Being able to plug a 64GB or 128GB microSD card into a phone gives you tremendous flexibility, whether it's with managing big videos or listening to massive music collections. Yes, we're grateful that Apple has increased the upper-tier model's storage capacity to 128GB, but its entry-level phones still come with just 16GB – an almost insultingly low number in this day and age.

For years, iPhone users have quietly admitted that for all the smartphone's strengths and design superiority, its battery life hasn't kept up with the best competitors. While the iPhone 6's battery makes up for some lost ground, it's still not great – at least by modern standards.

Many flagships boast over 20 hours of talk time and two weeks of standby time. Web browsing and video playback time tends to vary a bit based on the pixel density of the screen, since bigger displays with more pixels require more power to run. But in the final tally, a phone should have no problem making it from the moment you wake up to the moment you fall asleep.

Fortunately, the iPhone 6's 1810 mAh battery stores enough power to pull you through a full day of video, web browsing and music; it just won't last much longer. The latest phones from LG and Samsung will often make it through two full days of moderate use, or a day and a half of heavy use. If you're a heavy iPhone 6 user, expect to manage a full day without plugging in, but be sure to charge up overnight.

Apple's Touch ID makes a triumphant return in the iPhone 6, and it's as great as ever. So long as you properly train your fingerprints to the system, it'll let you unlock your phone and pay for iTunes downloads in moments. We had various reviewers in the office try it out, and every one of them was impressed. It's easy to set up, painless to use, and with the recent improvements in iOS 8, you'll now be able to utilize it in third-party apps.

Perhaps the best use for Touch ID is Apple Pay. Apple Pay uses the iPhone 6's integrated NFC radio to communicate with compatible point-of-sale systems across the country. You store your credit cards in the phone and pay by tapping against a scanner and holding your finger to the Touch ID sensor. Android phones have had NFC payments for a while, but Apple's managed to get the buy-in of every major bank and the big three credit card companies, and has implemented a super-secure system in which your credit card number is never actually used to make a purchase. Not enough retailers use Apple Pay to make it truly ubiquitous, but it remains a nifty feature that we've already grown to love.

Touch ID is great, but a few features are still glaringly absent from the iPhone 6. You can't listen to FM radio from your phone like you can with the latest phones from LG and HTC, nor is there an infrared blaster to let you control your TV. But the biggest absence is the lack of waterproofing: Now that Samsung flagships are getting water-resistant certifications, we want to stop worrying about spilling something on our iPhones.

The vast majority of die-hard Android fans would never consider buying an iPhone, while Apple fans wouldn't think of buying anything else. The rest of us are just looking for the best smartphone we can buy, and Apple makes a compelling case for the iPhone 6. It's stunningly designed and a pleasure to hold, with our favorite screen ever on a phone – even despite being barely over 720p. If you're looking for something that's light, chic, powerful and premium, this is it.

Calls:
to the US, Canada, Mexico & China
Visit Website
at
Tello
We check over 130 million products every day for the best prices
View All Deals
powered by